This weekend was filled with girlfriends and running.  Just the way I like it. 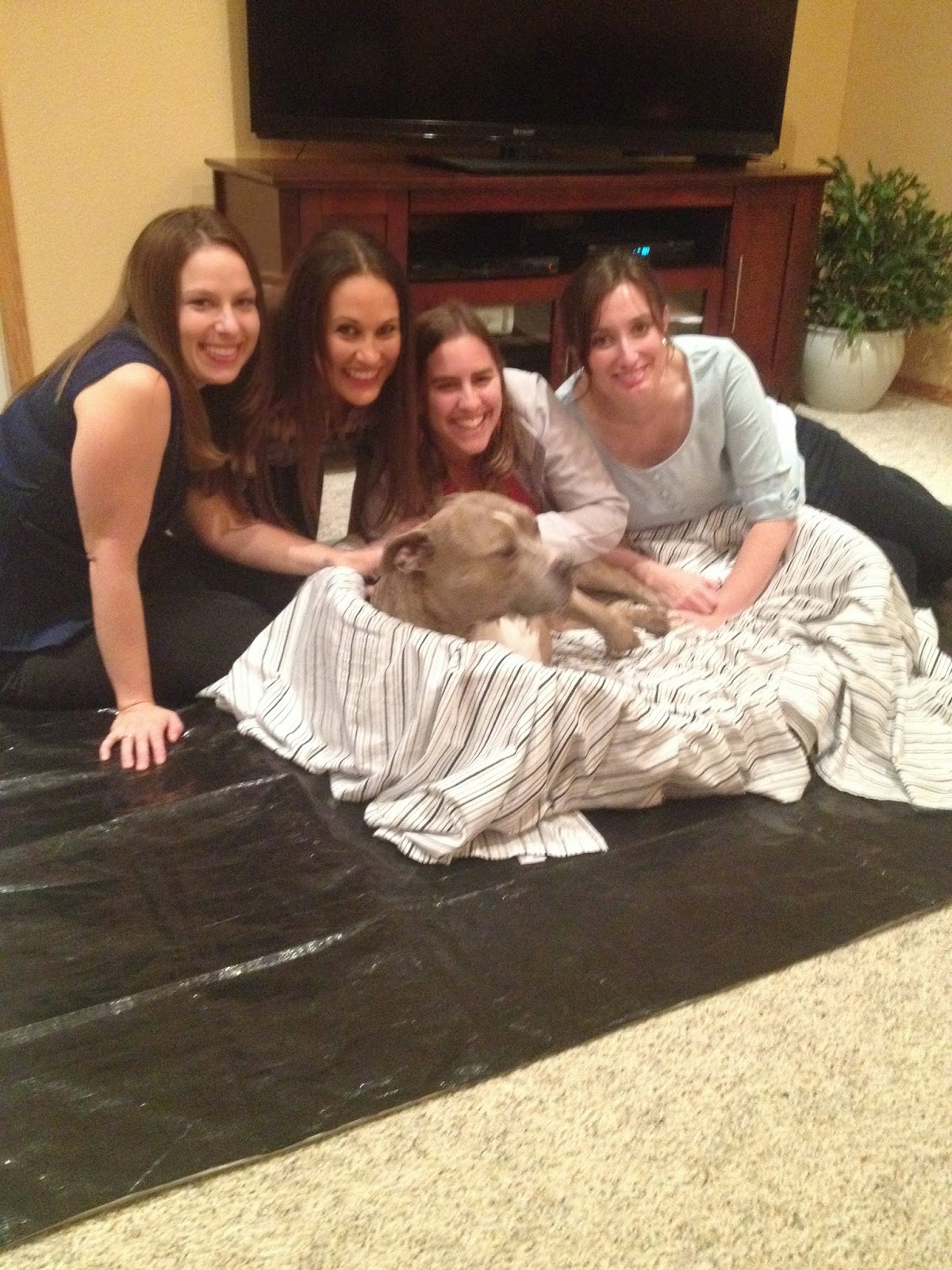 Next Monday is one of my best friend's birthday.  The ladies from my cohort who became the best of friends really quickly decided to celebrate this weekend because we are all busy next weekend.  We're all very low key.  We started the night with a drink at a local wine bar.  Although, none of us got wine. 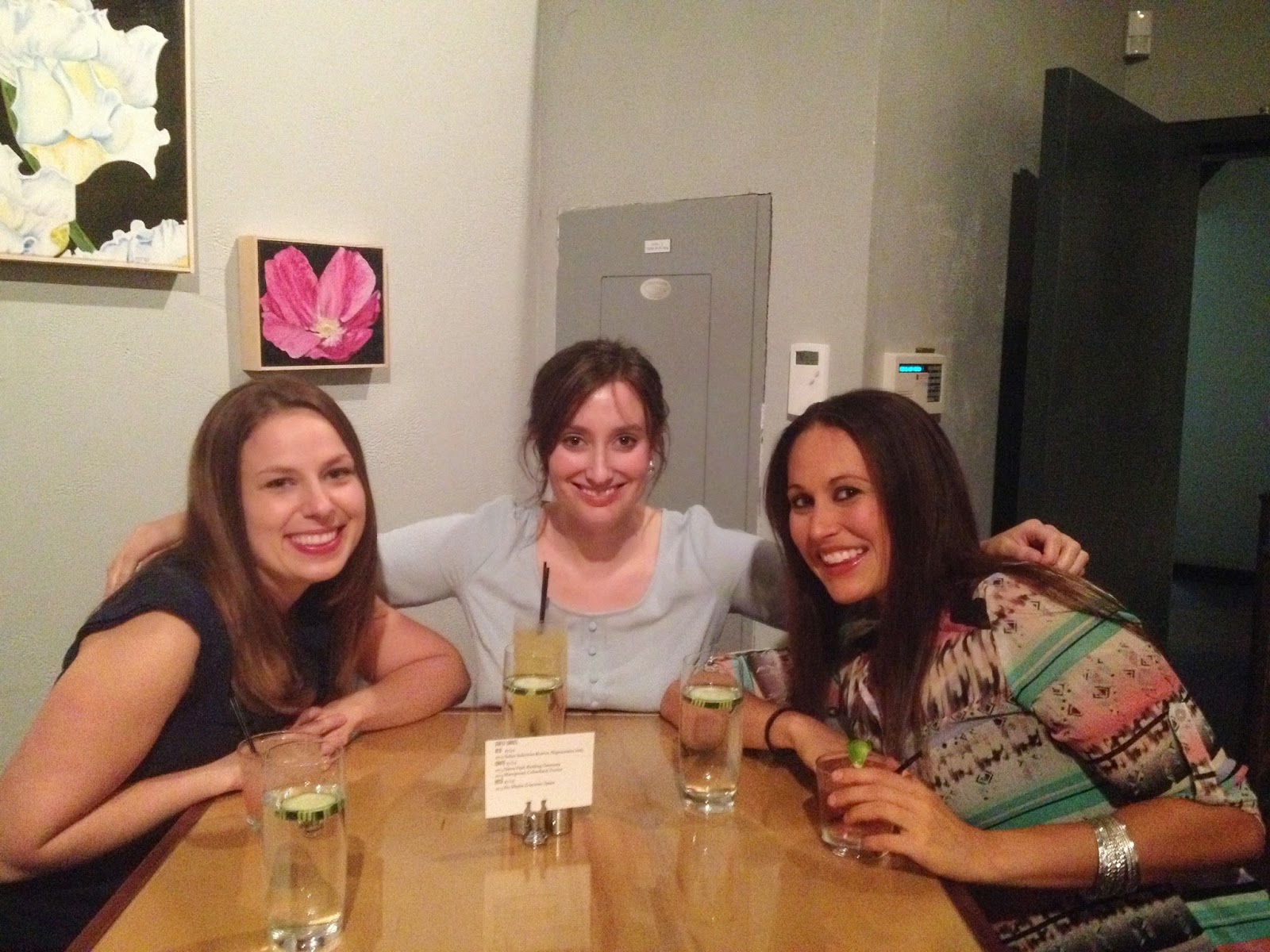 We then went to eat sushi, which is always a good idea.  I did not get any pictures of said sushi because I ate it way too fast, but we did manage to take bathroom selfies. 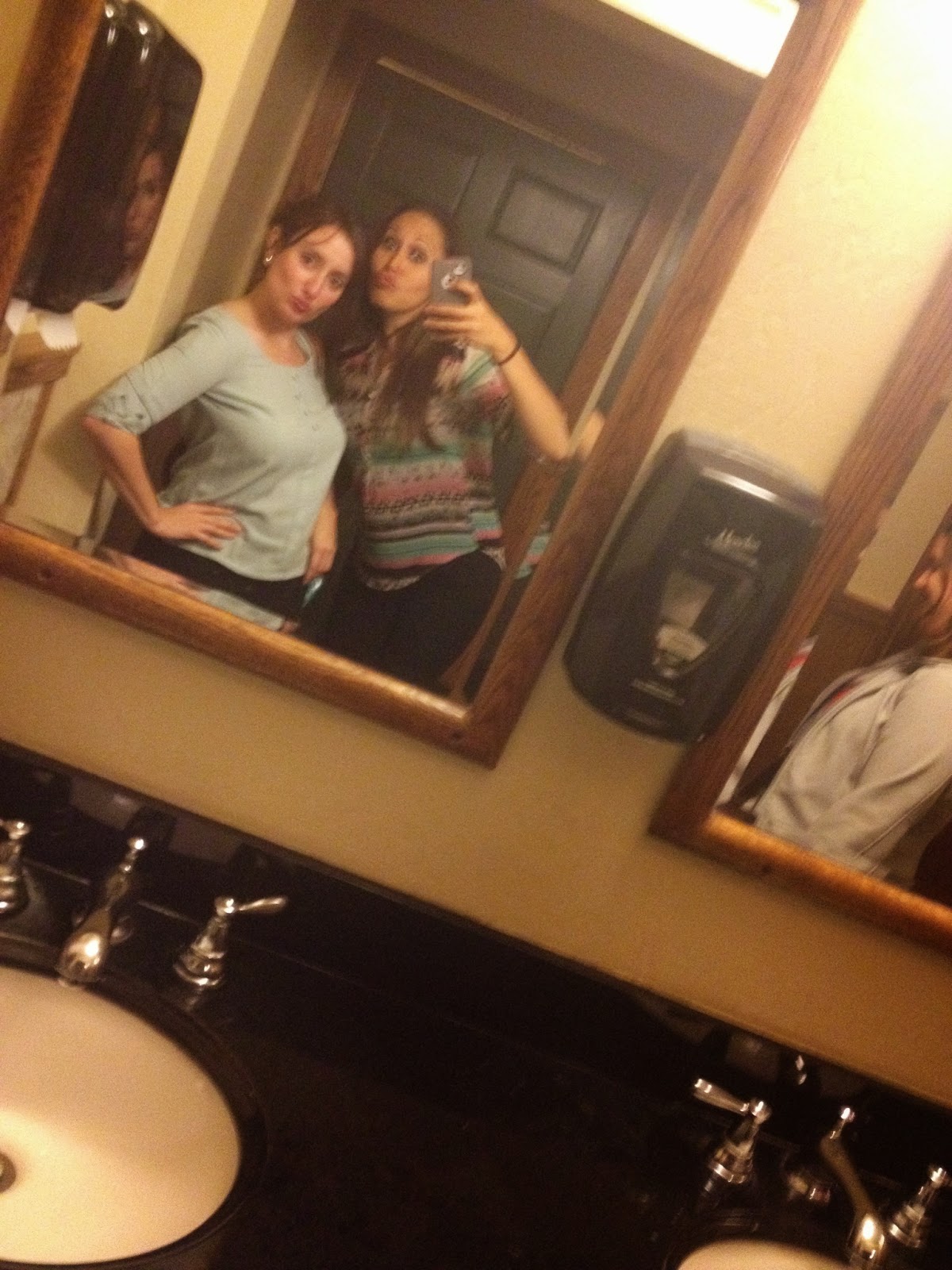 We are feeling old and trying to keep up with our students.  We're pretty sure the kids these days are doing bathroom mirror duck-face selfies, right?  Right?!  We're trying to up our street cred here. 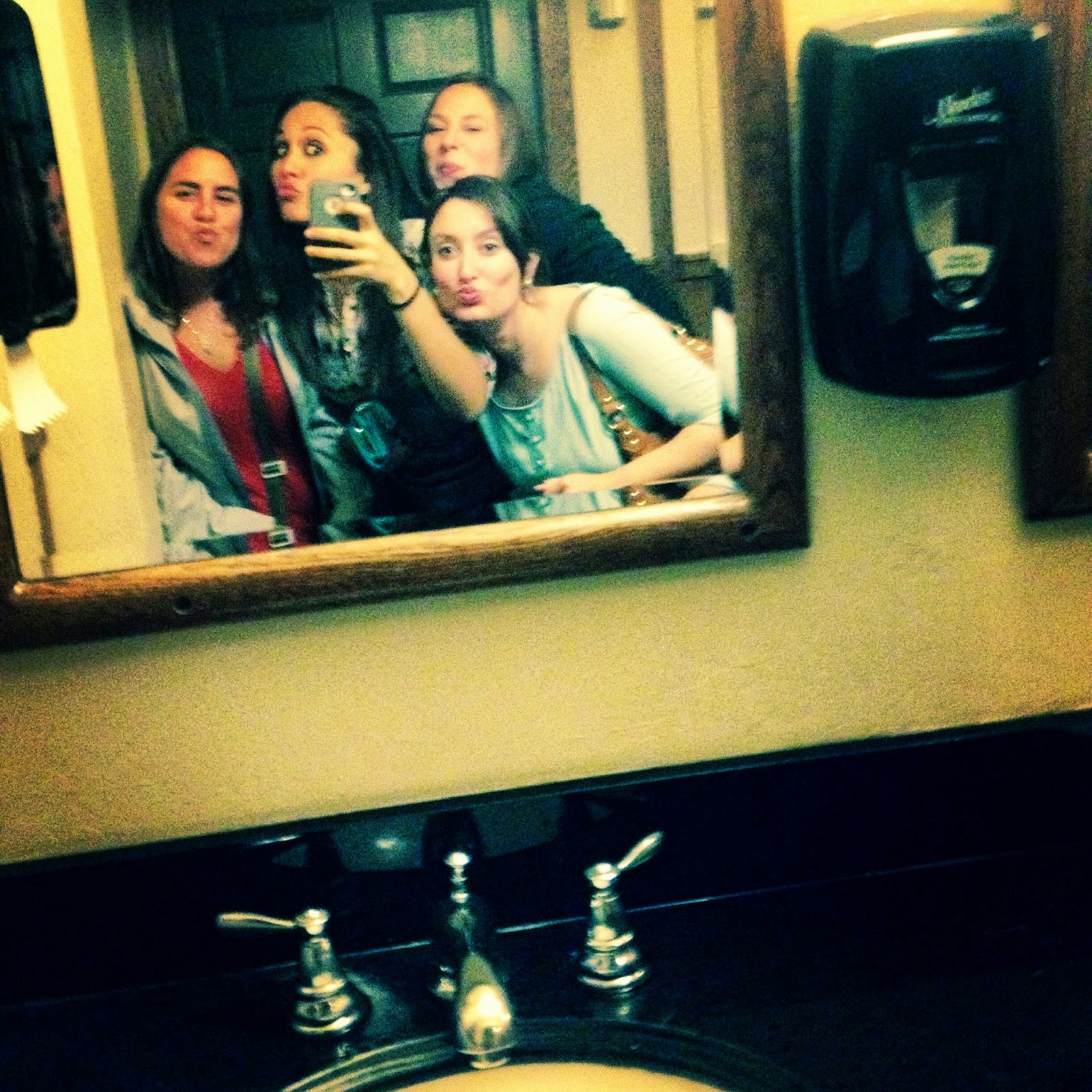 Then we went back to our friend's house where we had a photo shoot with the dogs, because, let's be honest, they are fabulous. 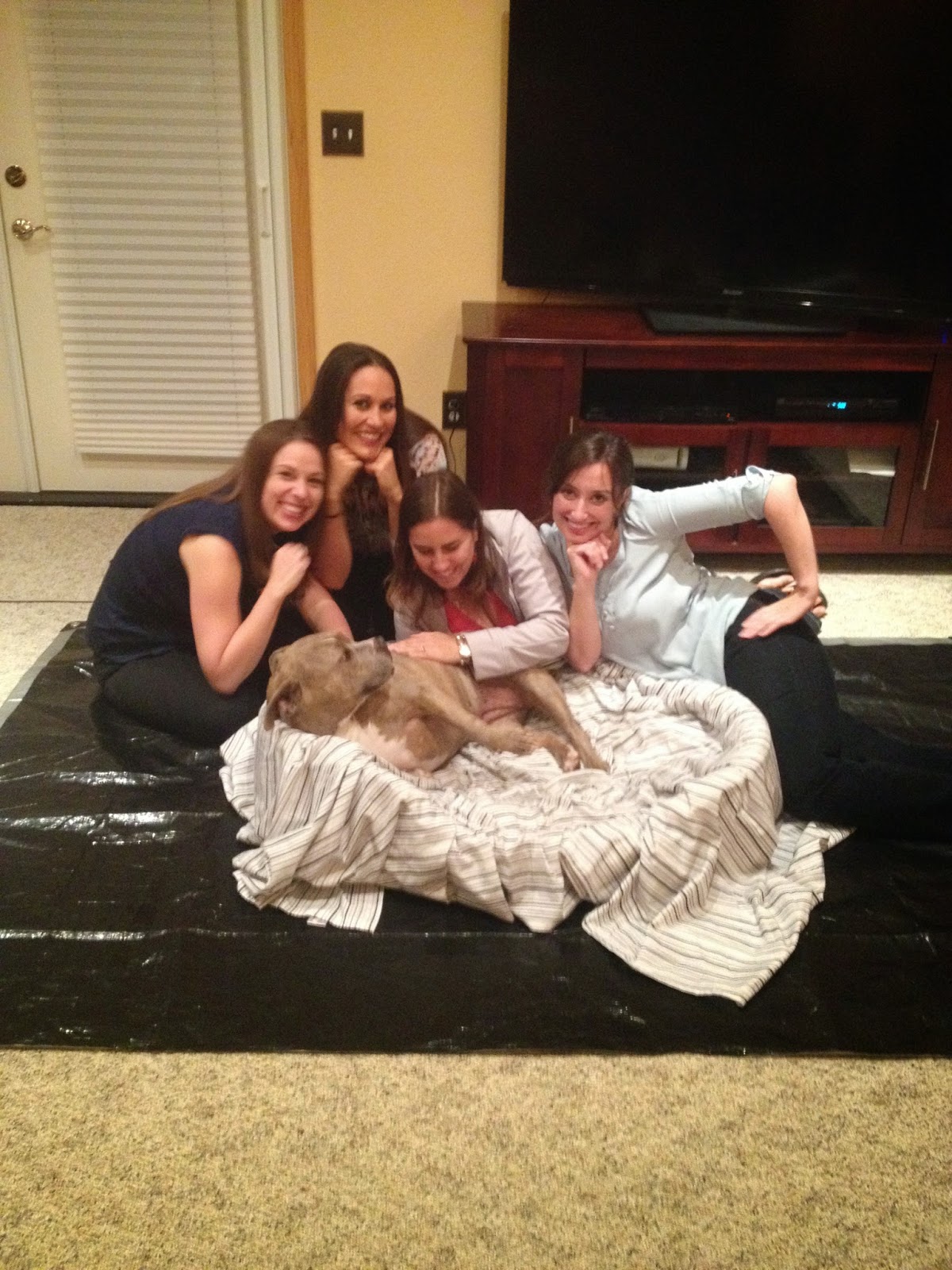 That one is our 2001 senior portrait look.  This next one is just us being weirdos. 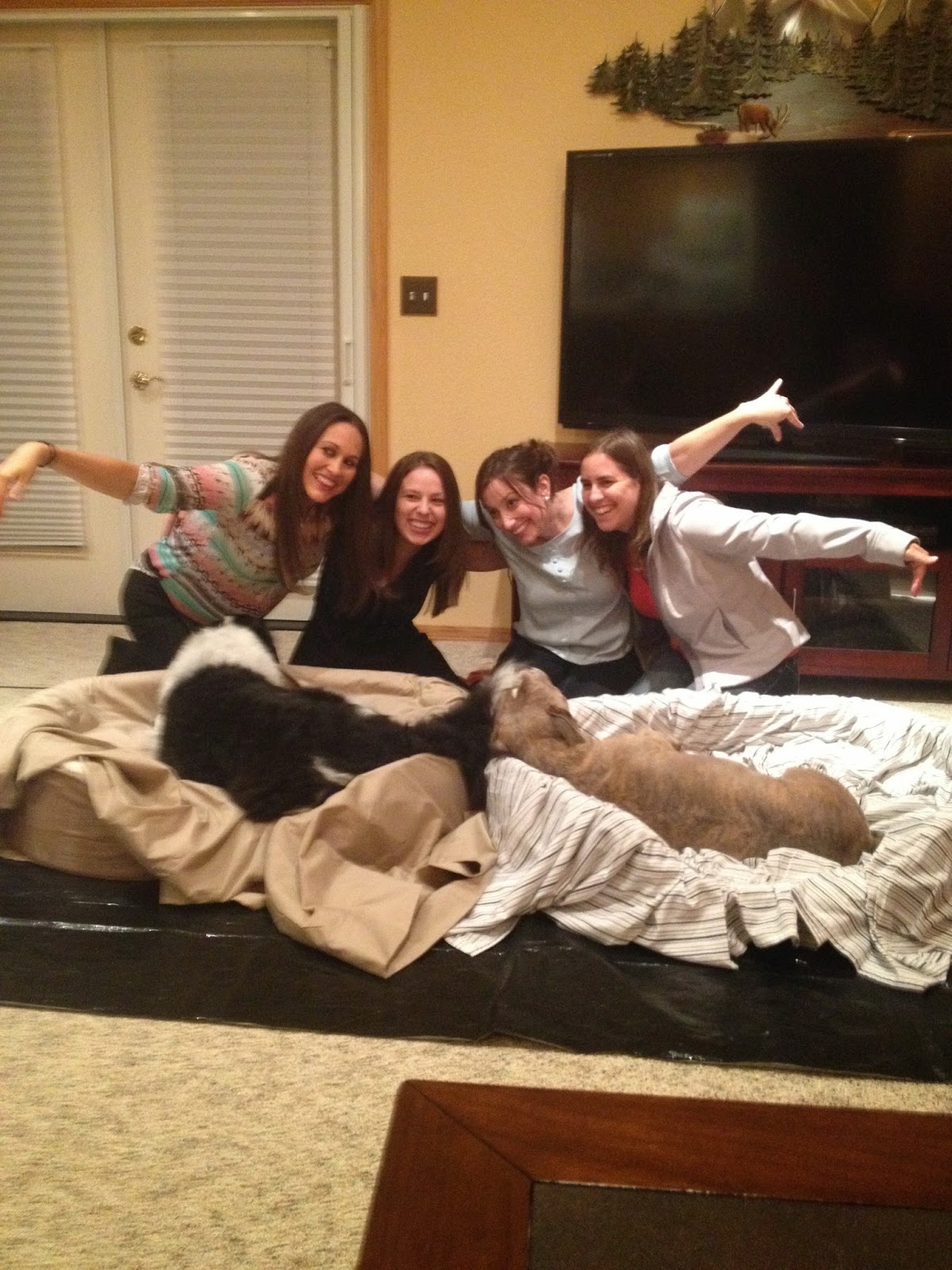 We proceeded to get into our pjs and brought out the birthday cake while Sex and the City played in the background. 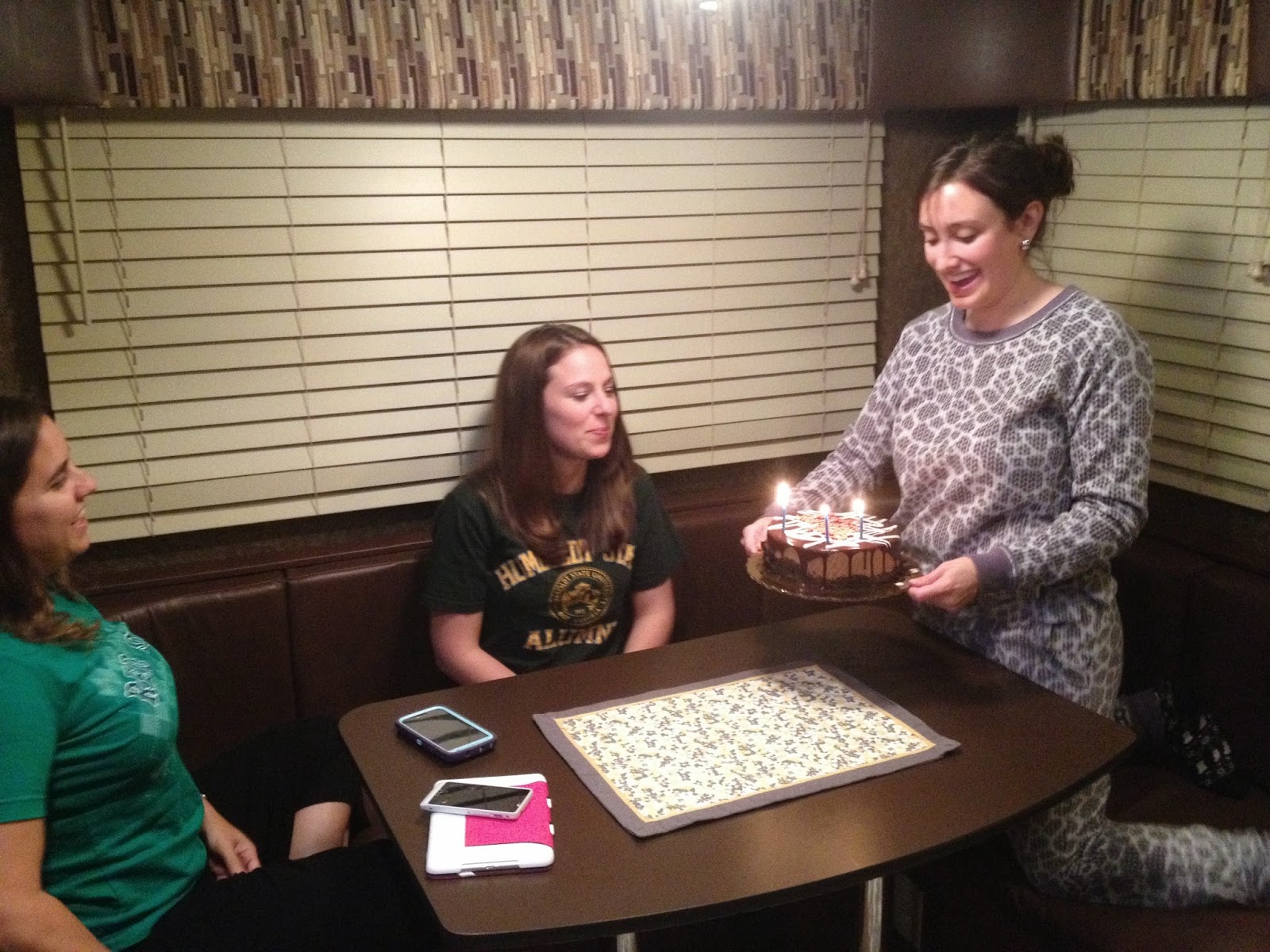 She made a wish and blew out the candles. 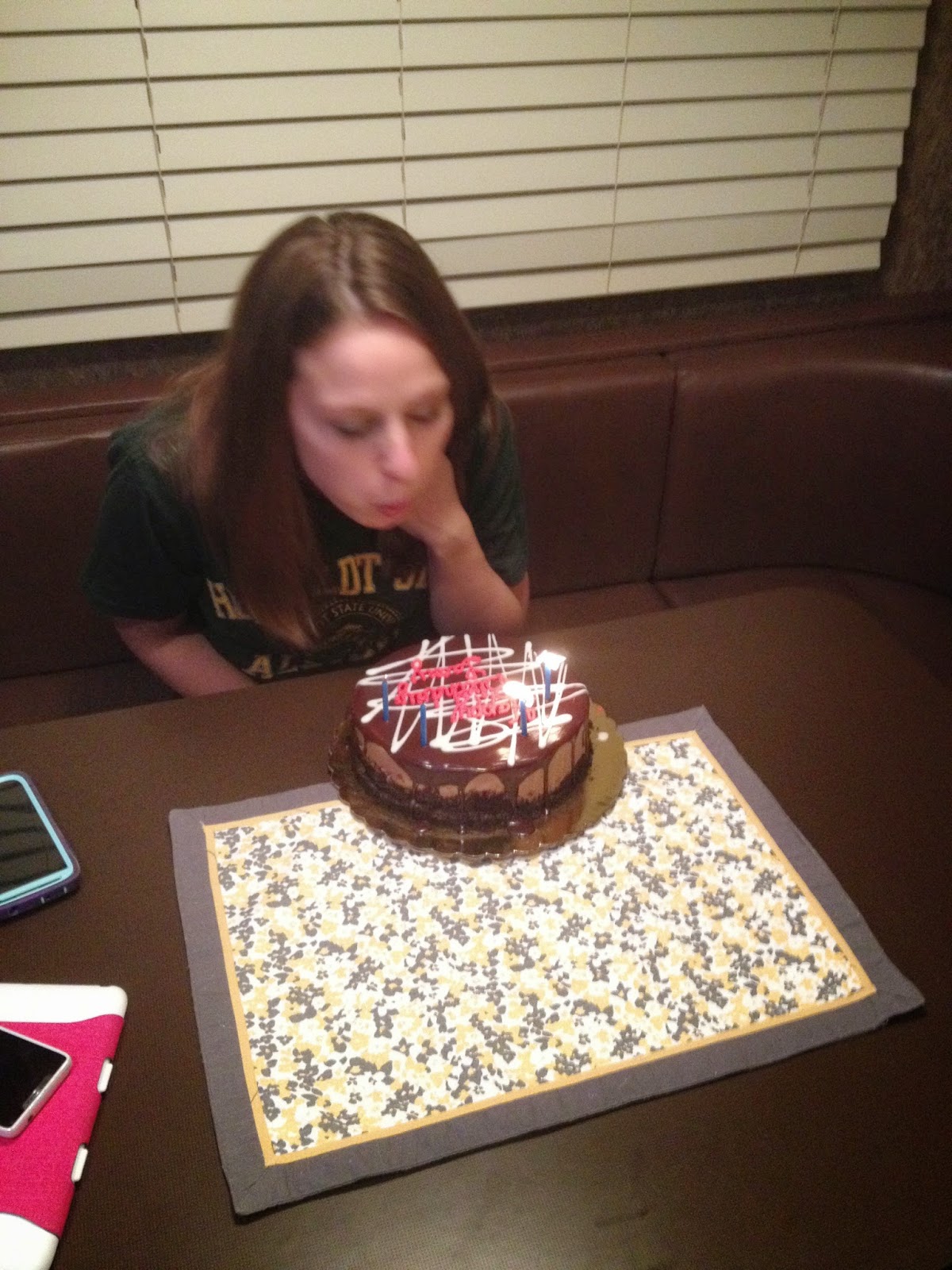 Our friend's husband makes the most amazing popcorn and he made us a giant shopping bag full of it for our evening.  Well, since I can't have cake, I took over the popcorn bag and ate 99% of it. 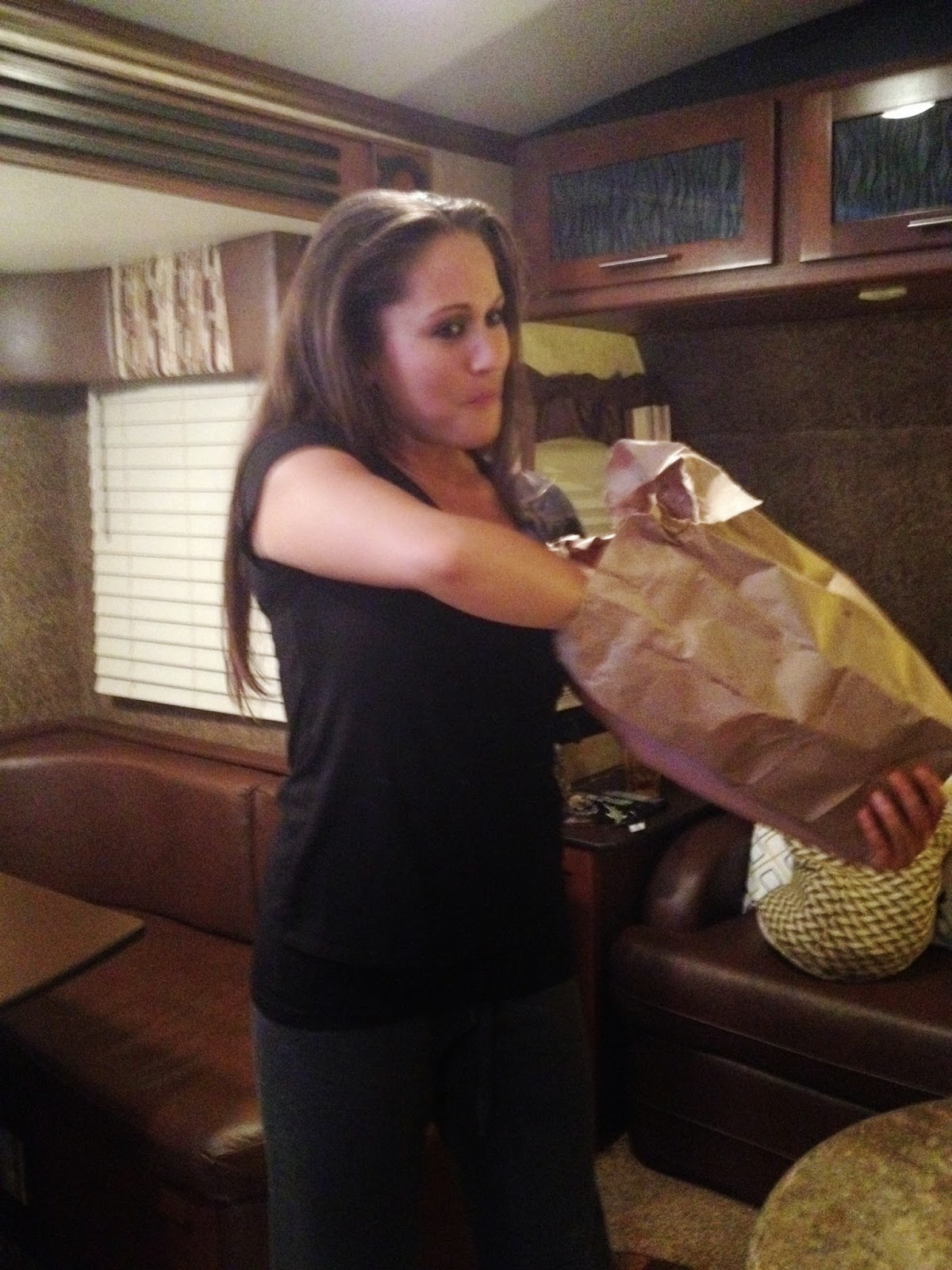 After a late bedtime last night, this morning I was up before the sun.  There was a 5k, half marathon, and marathon today and my friend was gunning for a PR in the half.  This is the exact same course that I have run twice (only in the Spring),  and I just ran a half two weeks ago, so I wasn't about to run the half.  It was super tempting when we got to the race though.  I was smart and only signed up for the 5k.  I was kind of excited because I have never officially run a 5k.  My friend and I warmed up for 3 miles before the start of the marathon/half at 9am. 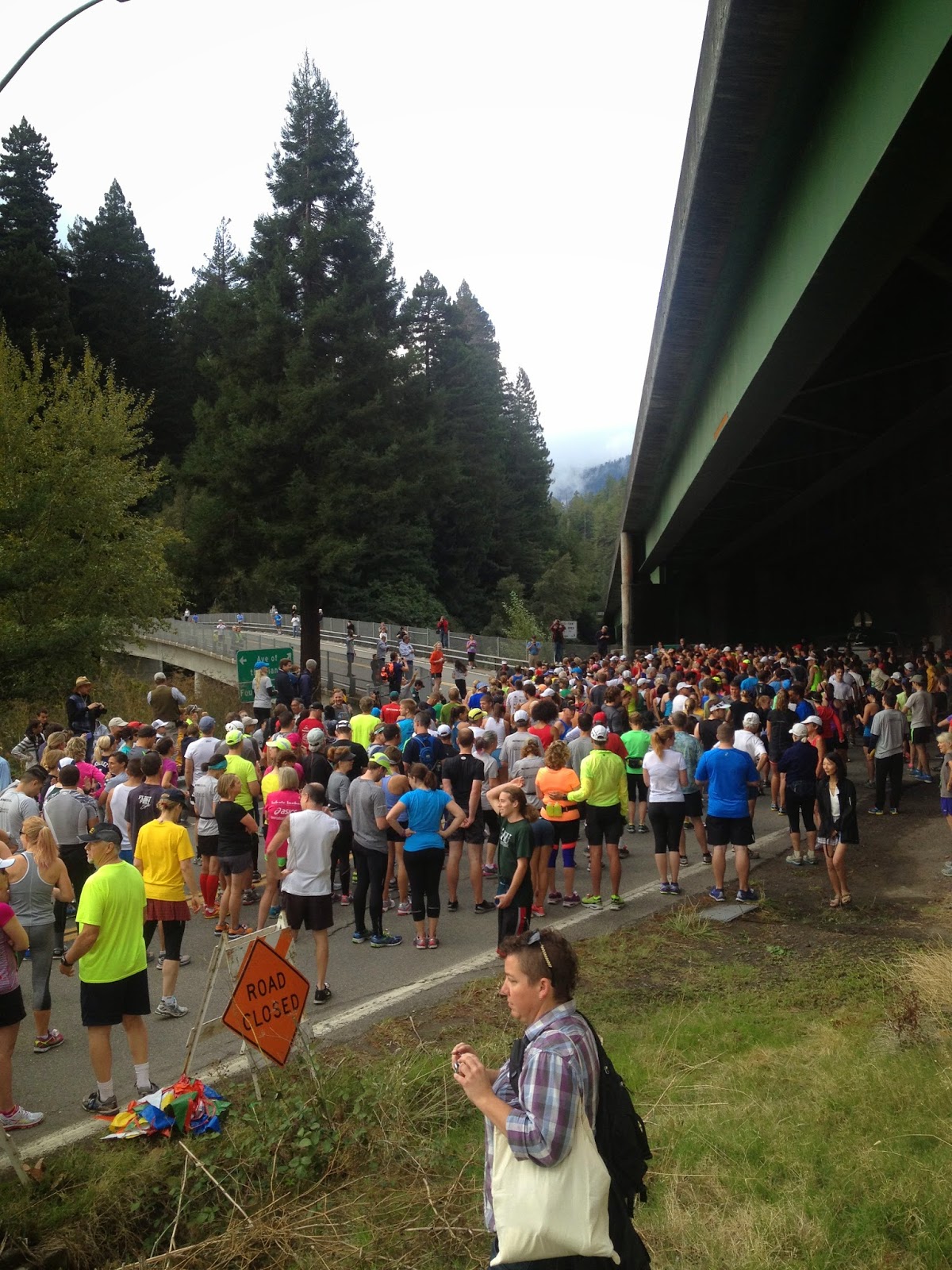 I won't lie.  It was really hard watching the start of this race and not being a part of it.  But, I need to be smart and not race two half marathons back to back.  I'm not that crazy of a runner.  So, I continued on for another mile and a half on my own before our 9:15am start. 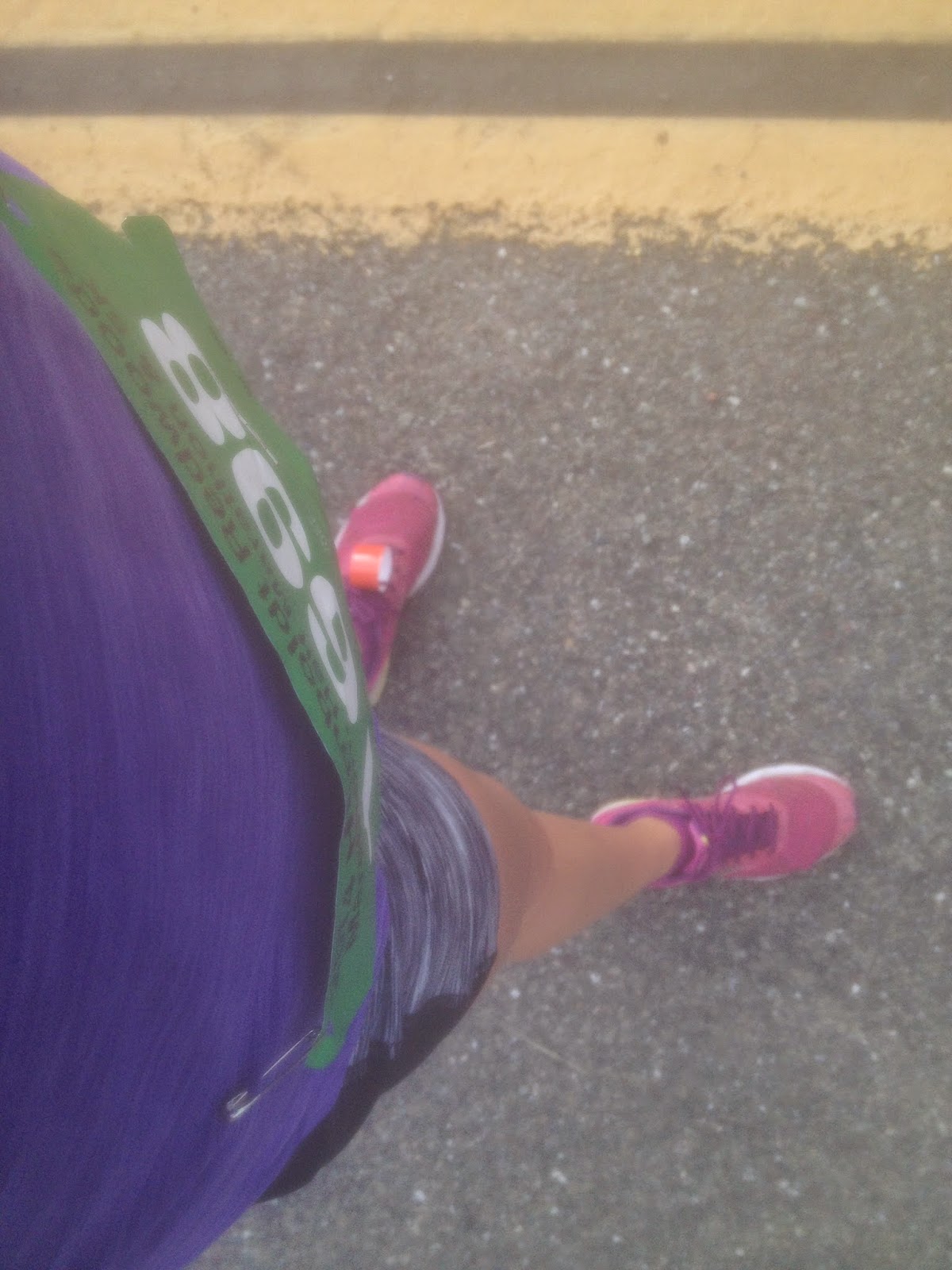 What I learned--- The 5k is HARD, but SO fast.  I went out fast, as I always do.  I don't actually know my splits because I already had 4.5 miles on my Garmin, so I was just going by feel.  I wanted to put as much effort into this race as I could since I knew it was so short. 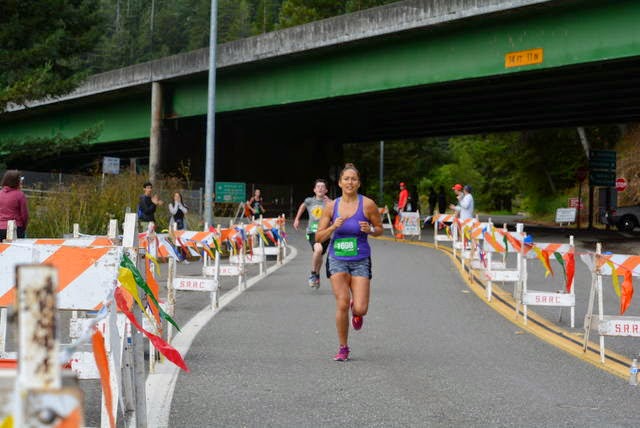 At the turn around, I realized that I was the third woman and the fourth woman was way, way behind me.  So, I knew I could slow down if I wanted to.  But, I wasn't about to do that with only a mile and a half left. 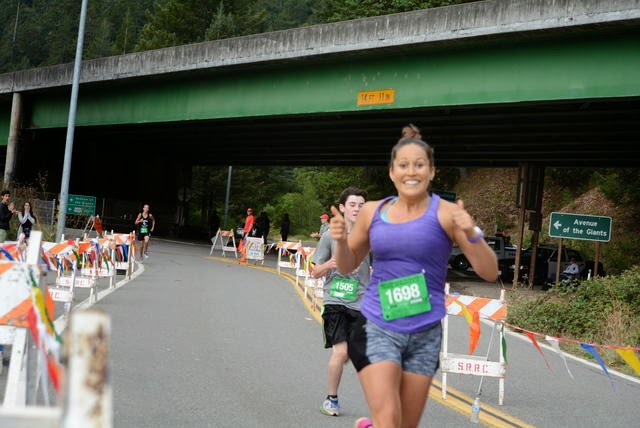 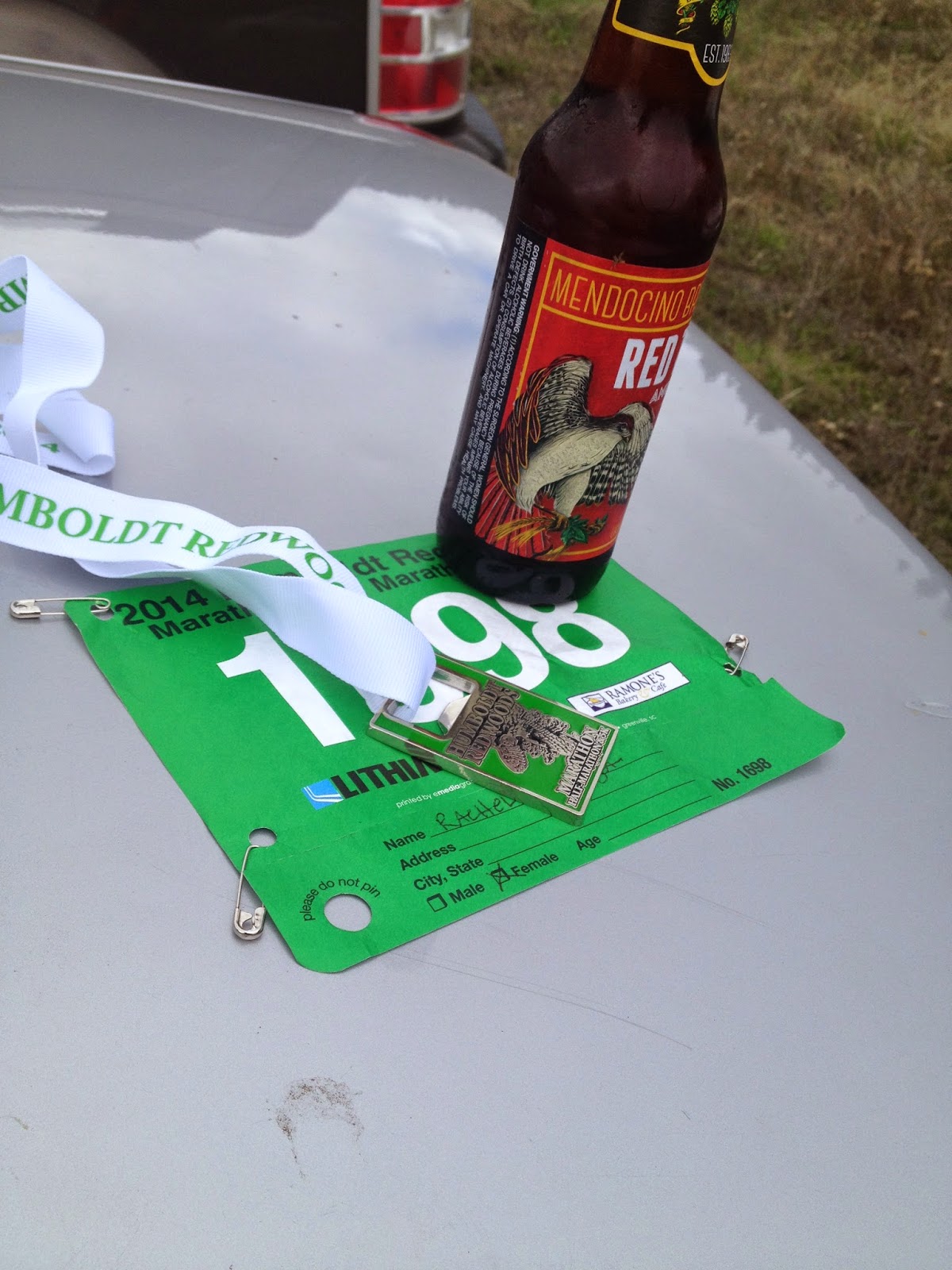 I kept running (much slower) until my watch said 9 miles and the clock said an hour.  I knew the half marathoners would be coming in soon and my friend was gunning for a sub 1:14.  The winner came in at 1:05!  Pretty impressive.  My friend beat his goal at 1:13:50.  Yes.  He's very impressive. 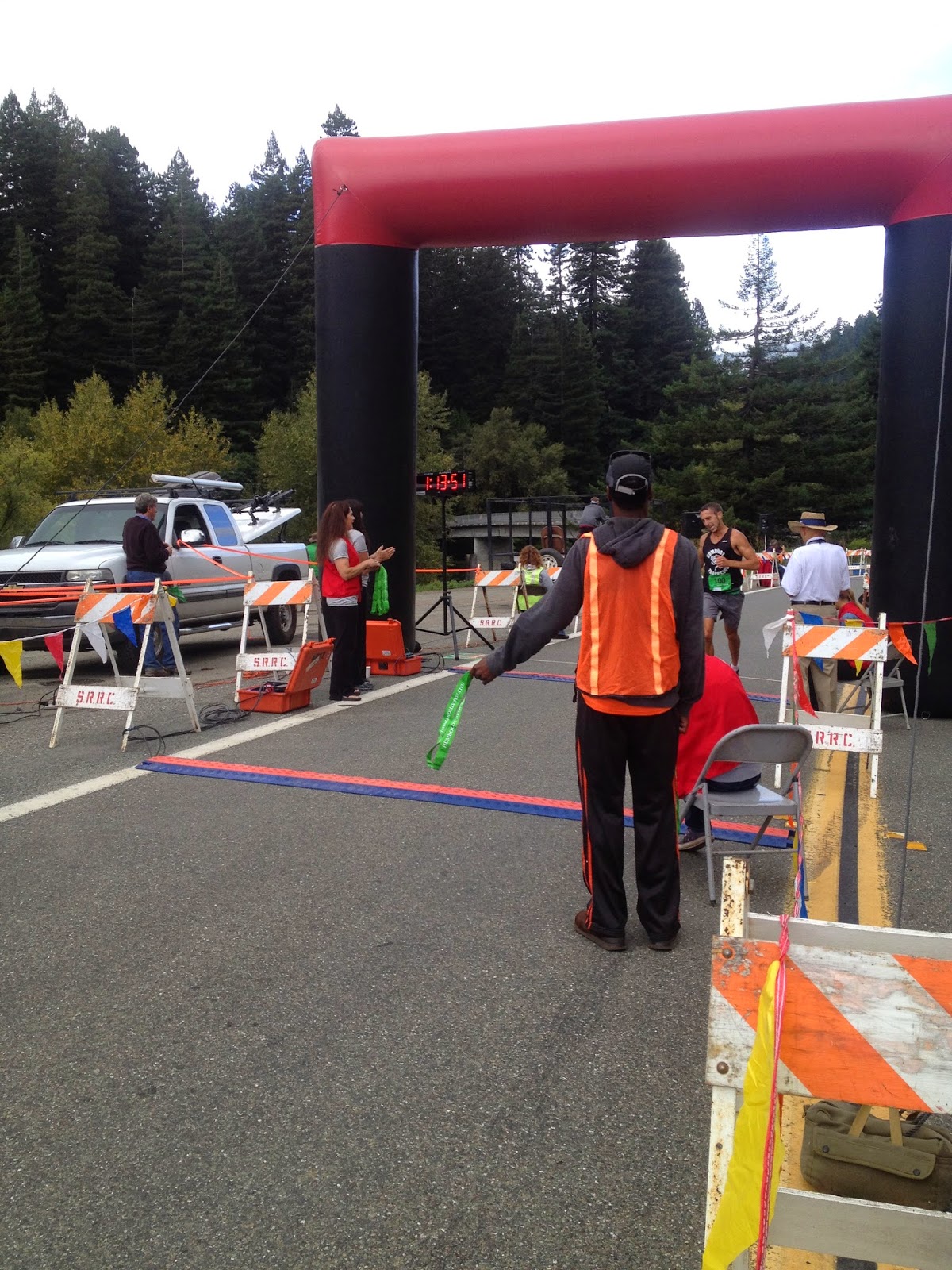 I cooled down with him and two other boys who ran the half.  All three of them are training for a marathon, so they needed some more milage for the day.  By cool down, I mean we ran at a 7:25 pace because these boys are fast.  The other two had just run a 1:08 half...  The rest of my day consisted of lunch, a walk around the park, and family dinner.  Now, it's 9pm and I am ready to go to sleep and begin another week of school.  How does Sunday come so fast?

Posted by NotRachem at 9:09 PM