So, most days lately, I completely forget that I have my own little space on the internet where I used to write almost every single day.  I read your blogs obsessively (except for last week when I got way, way, way behind), but for some reason, I legitimately forget about my own!  Well, in the past month or however long it has been, my running story has turned into a real drama.  And I do not like it.  Not one bit.  When I last left you, I broke the news that I had bitten the bullet and decided to train for a May marathon. 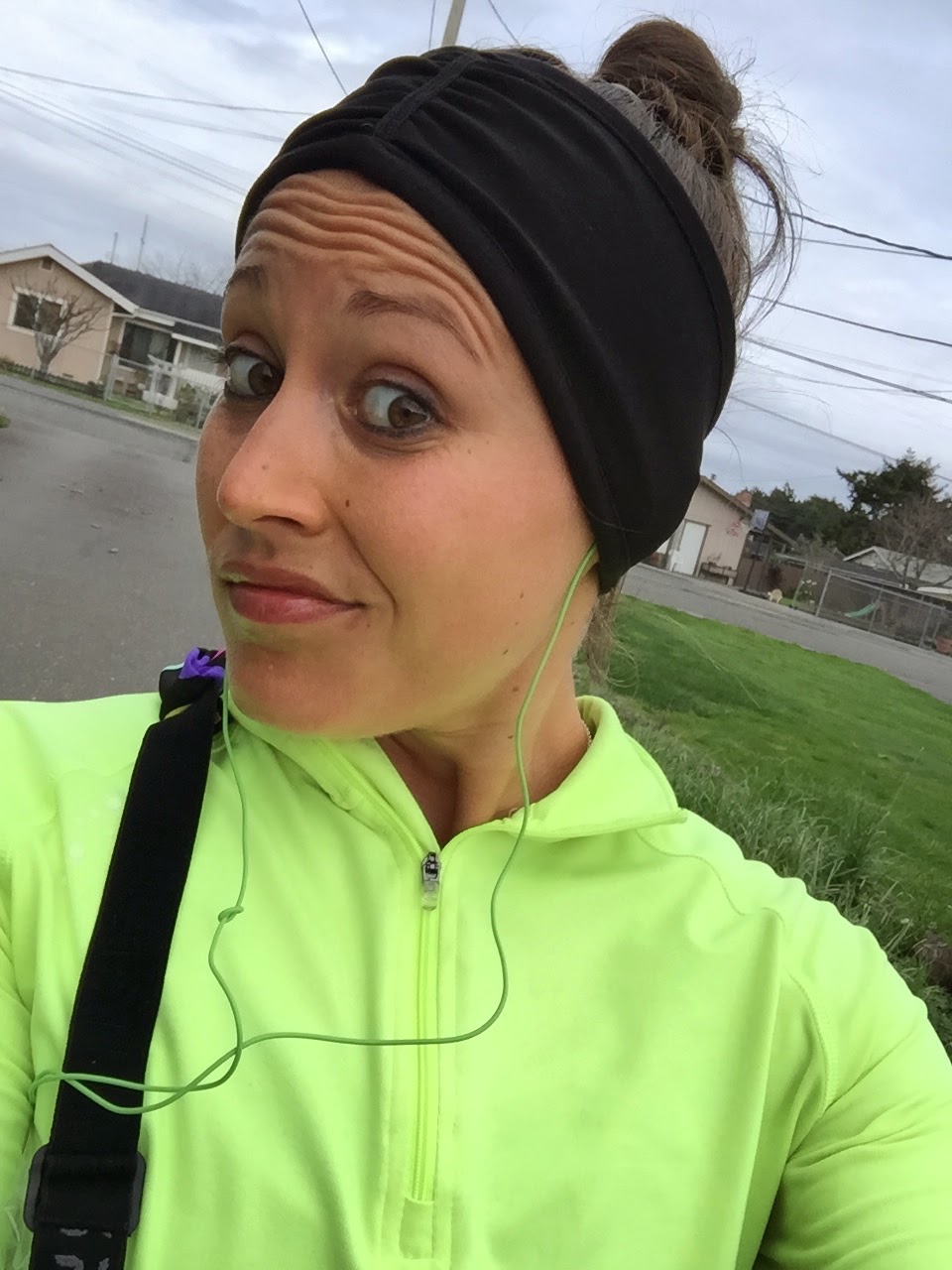 Training was going extremely well.  I was very happy with my running progress.  I was running between 55 and 60 miles per week and getting a really great runner's tan going on.  My sock tan lines are off the hook!  As is my watch tan line. 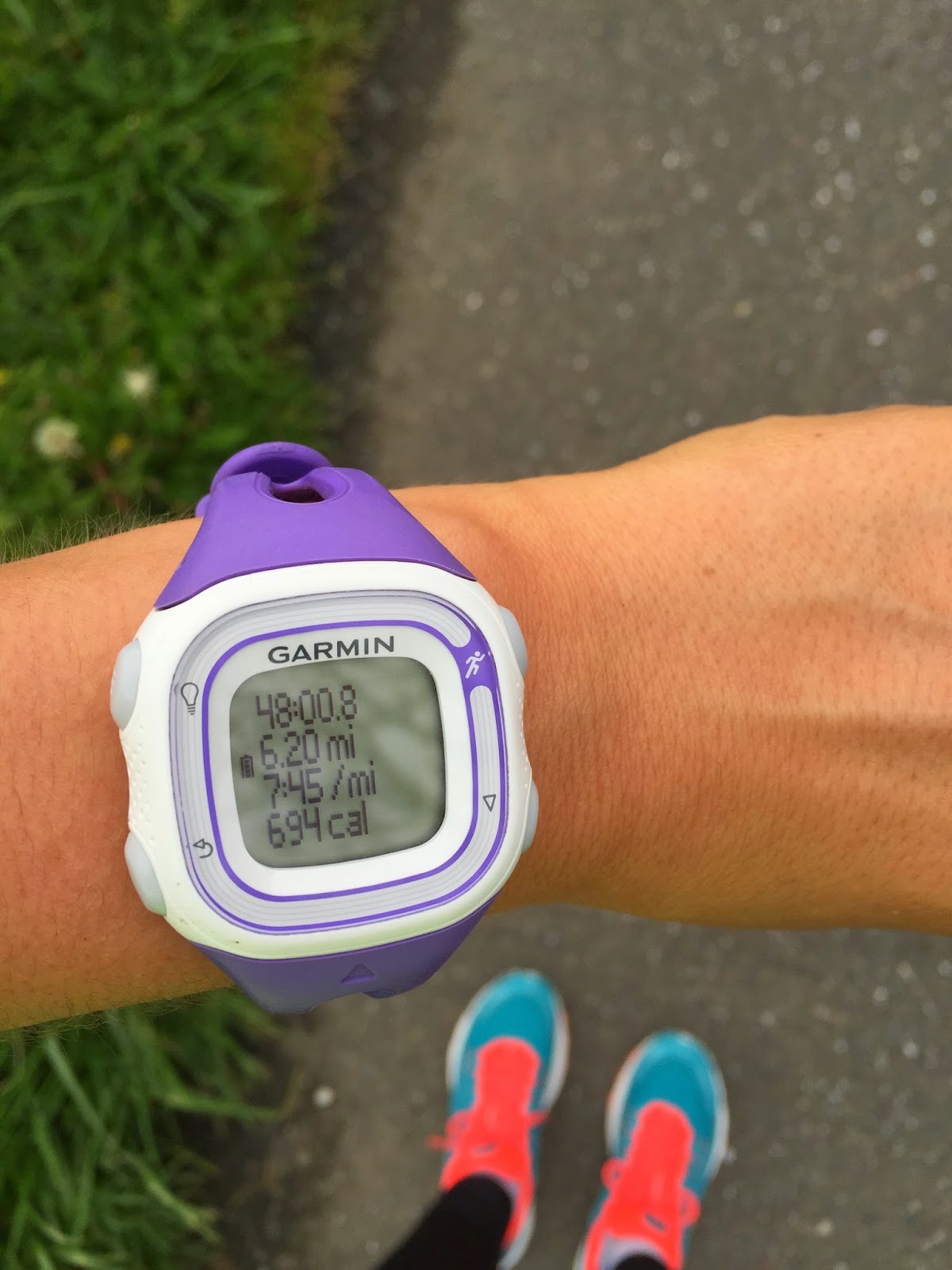 I even forced my way was invited on my best running buddy and her husband's long runs and they embarked on training for Boston (where they currently are at this very moment).  I followed along with them on a 15, 18, two 20s, and a 21-miler.  These were my favorite runs of the entire cycle.  I was learning how to fuel and pace myself properly.  They are AMAZING pacers.  Each mile was exactly the same time as the one before and then we always seemed to end with a fast finish.  I became really great friends with them and I felt like a total bad ass after three hours of running. 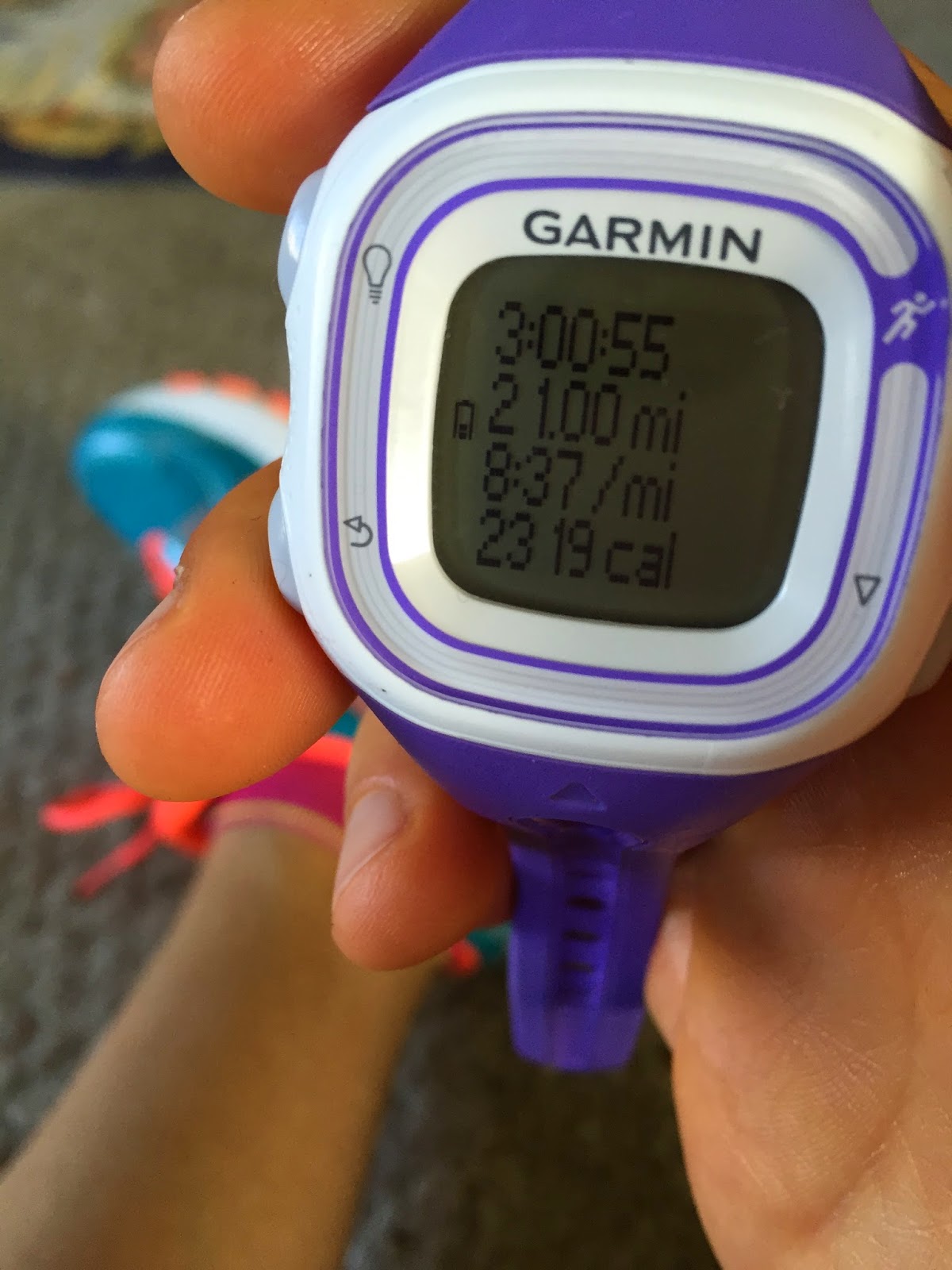 I even helped Karen kick off her peak week by spending a weekend with her playing in the mountains. 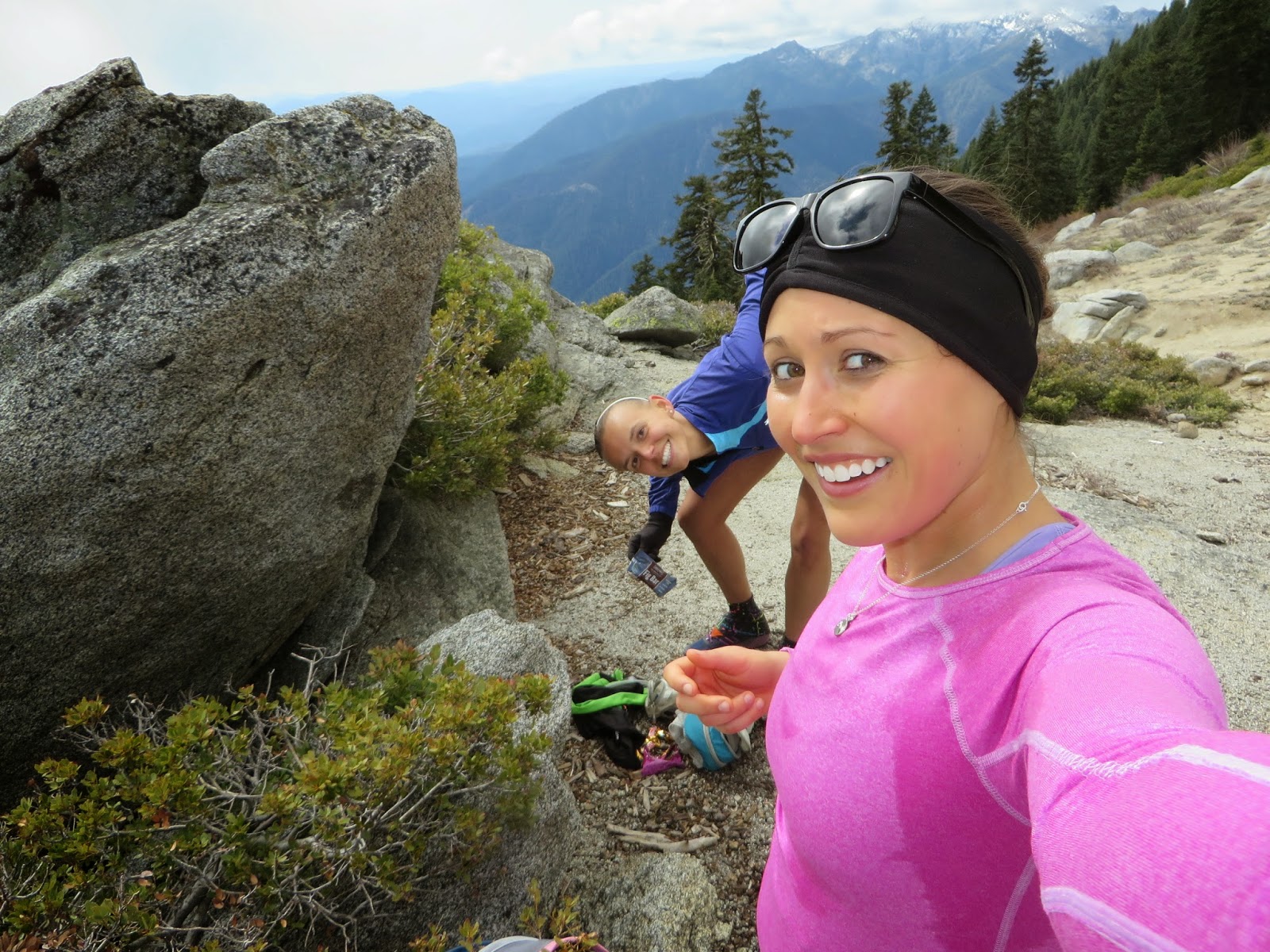 I have never done much trail running, but with every step on those trails that weekend, I fell more in love with running.  I didn't even realize that was possible.  Especially while climbing 4,000 feet of upness. 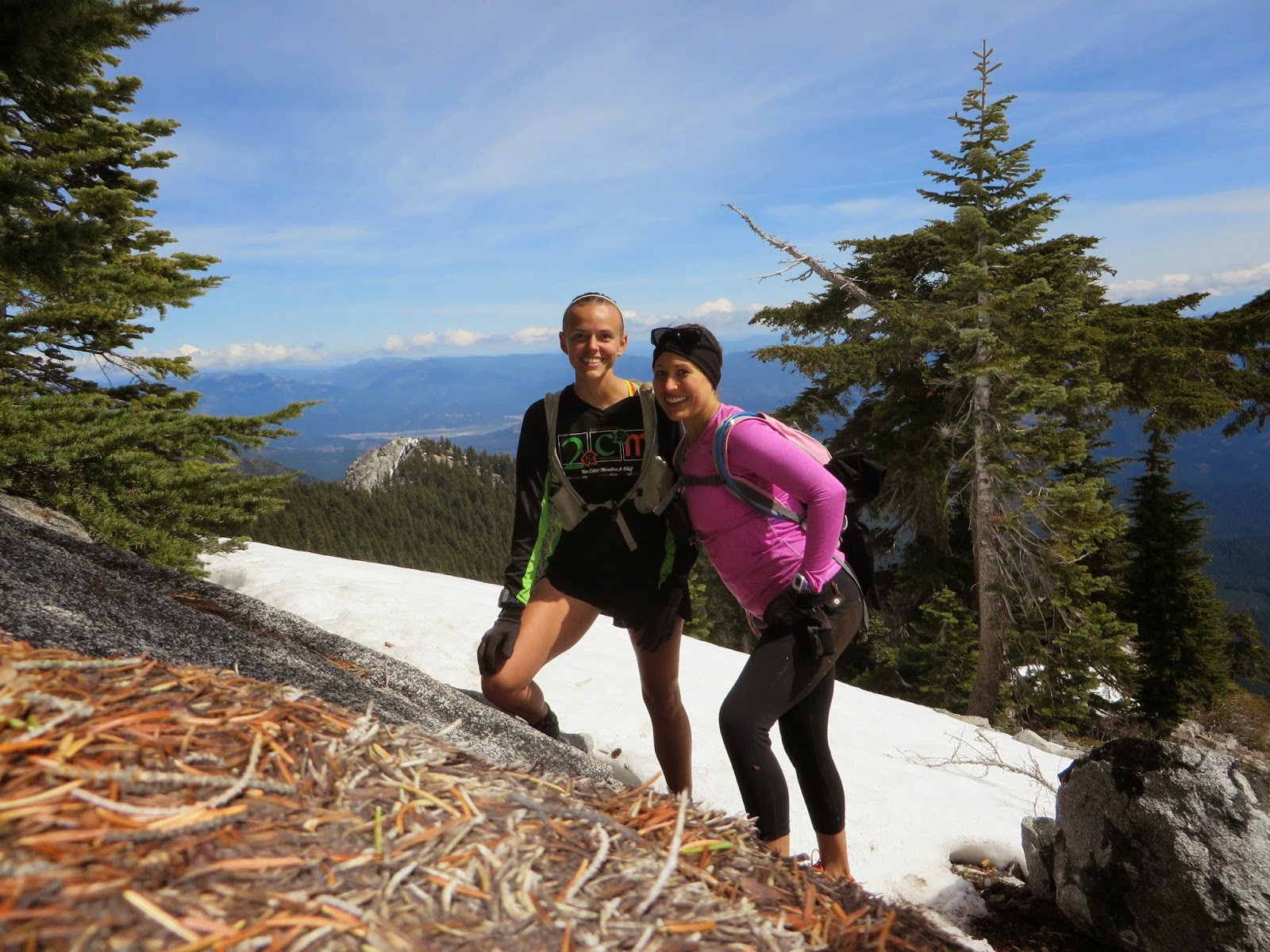 Then, the night after my 21-miler, my body decided it had endured enough.  And I caught the wonderful flu that everyone at my work had been sick with for weeks.  I threw up the entire night and was completely unable to get out of bed the next day.  I mean, I literally laid in bed and slept probably 15 hours that day.  I got up to force myself to eat a half of a banana and my friend made me broth to drink.  I had a terrible fever the entire day and throughout the night. 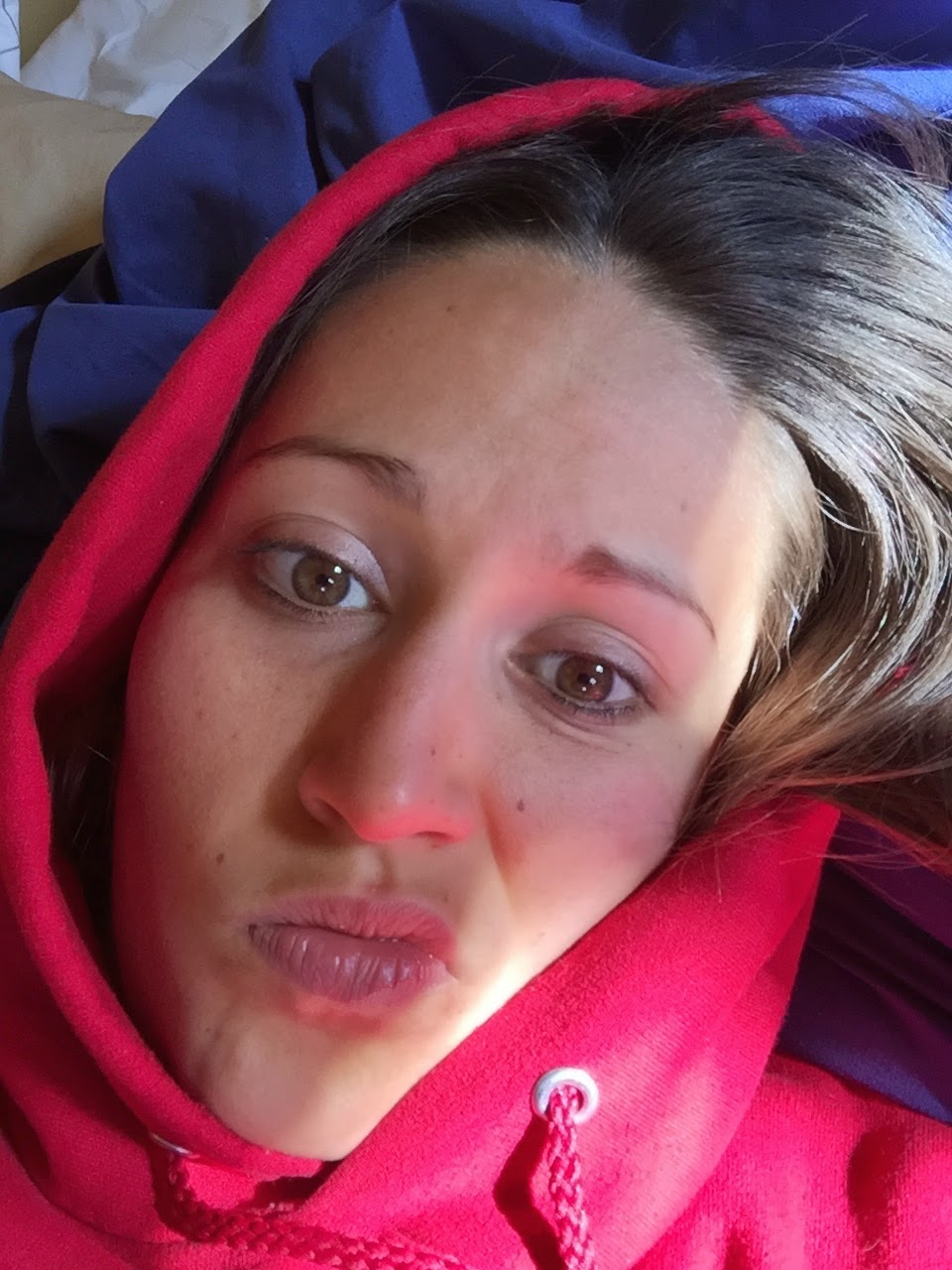 There's always enough energy for a selfie though!

The next day, I felt well enough to go to work (and finding a sub is damn near impossible for my position), so I went in.  I was still unable to eat much, even though I tried.  I couldn't even drink coffee.  That's how I know things are really bad!  I drink at least 2 cups a day.  That evening, my friend (who has also taken it upon himself to be my running coach) wanted to shake out his legs with a short half hour run.  Being the addict that I am, I went along with him.  Well, in my under-fueled, lethargic, dehydrated state, I had forgotten that I felt my knee lock up at around mile 17 of the 21.  I ran through it anyway because I am an idiot and way too stubborn for my own good.  I certainly remembered by mile 2 of our 4-mile run and yet continued to run through excruciating pain for two more miles.  Of course, I was lectured by said running coach all through dinner about how I should have told him about my pain right when it started.  We've been running together for a year now, he knows what kind of runner I am.  It doesn't stop the lectures though. 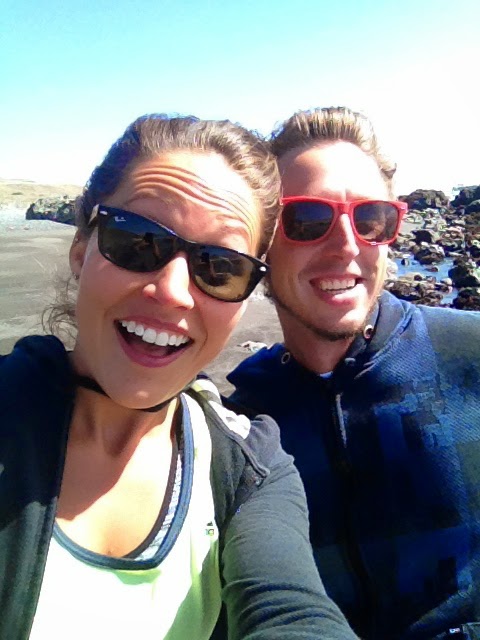 The next day, he asked how I was feeling and if I was up for trying to run again.  Of course, I said yes.  My milage for the week was already going to be low, as my weeks start on Sunday and that day was spent horizontally.  This frustrated me since I am a little OCD about my milage. (Is anyone really surprised...?)  At a quarter mile, my left knee really, really started to hurt, but I kept my mouth shut.  At a half a mile, he asked how I was feeling and said, "You better not lie to me!"  I told him that the pain was at about a nine and we probably should just quit.  He forced me to stop running immediately and sit in his front yard in the sun and ice my knee.  I sulked and decided that my running career was officially over.  I may be a bit dramatic. 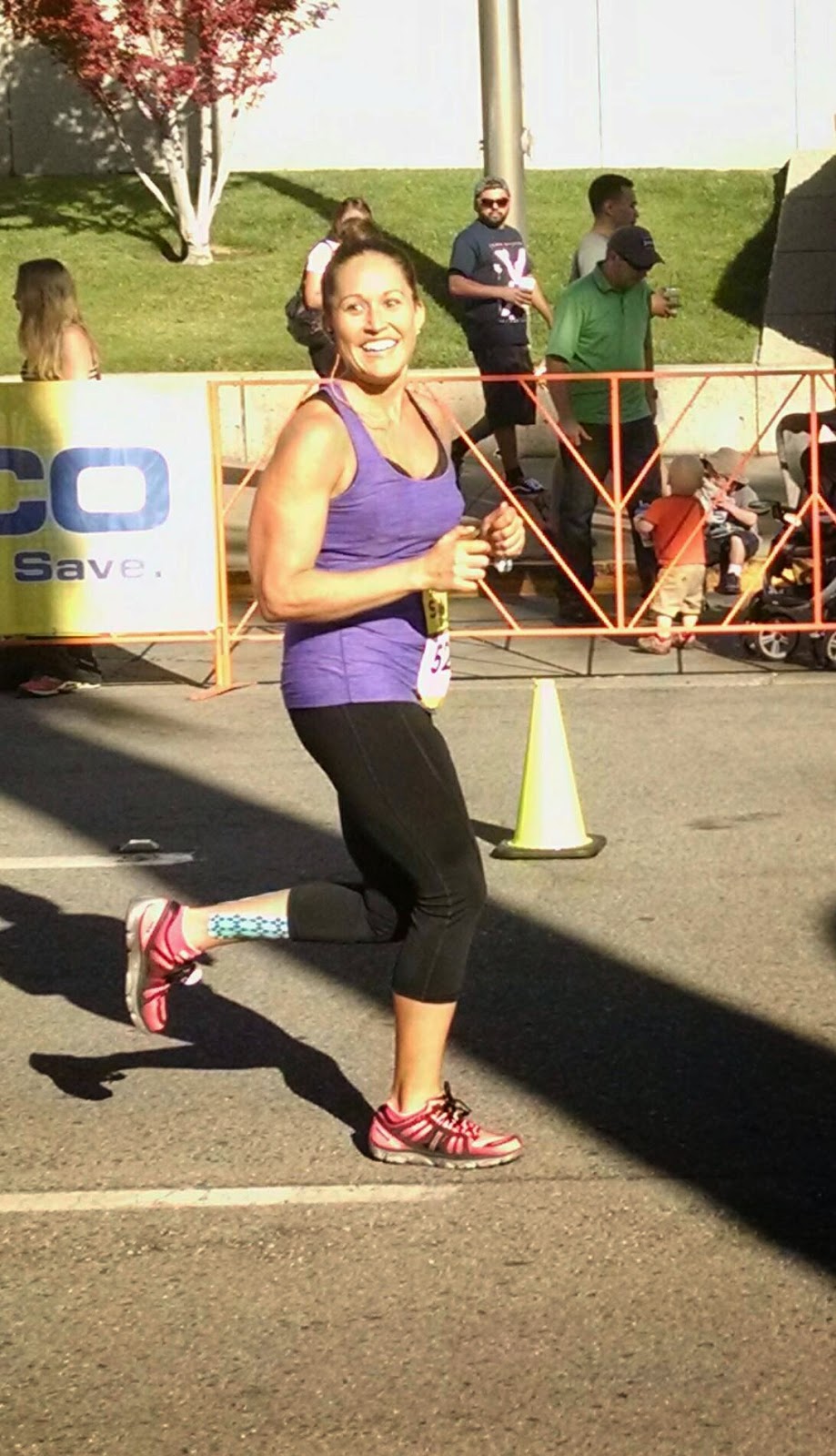 And so, I went from a 60-mile week to an 11.5 mile week, just like that.  (Yes, I snuck in a 7-mile run on my own without the coach around to yell at me.  Yes, he did yell at me the moment he found out I ran the 7 miles.  Yes, my knee felt terrible afterward.)  I don't even remember the last time my weekly milage was that low.  Probably in 2012!  That Friday marked our Spring Break, and I took off on an excruciatingly long road trip.  This is probably the best thing that could have happened to me. 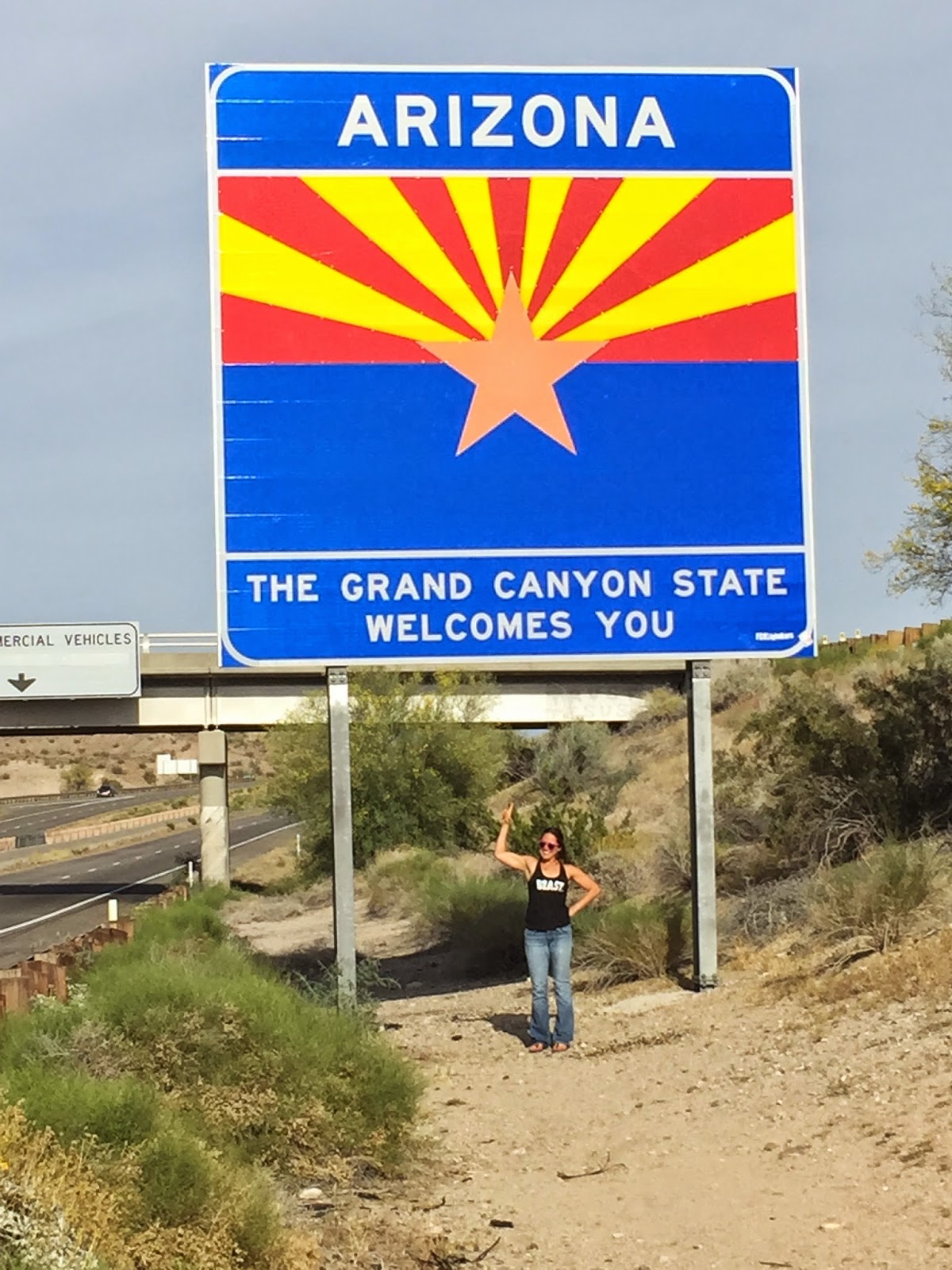 Sitting in the car for hours forced me to actually REST my knee.  Of course, getting out of the truck was extremely hard after 5-6 hours sitting with my knee bent.  But I got creative and figured out ways to ice and compress. 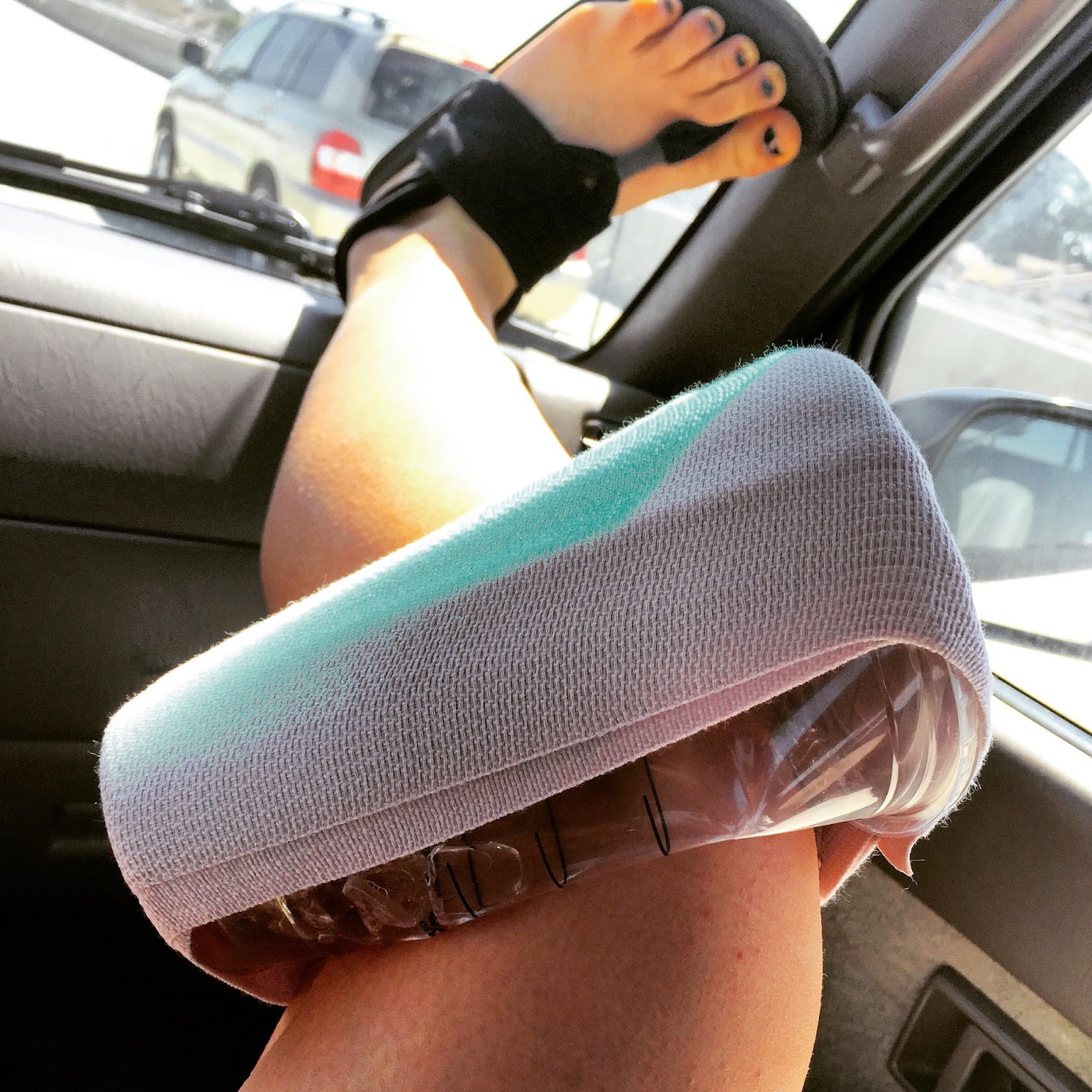 Iced coffee is good for more than just a caffeine fix.

I took two whole days off from running.  I began referring to myself as a former-runner and started stories with, "Back in the day when I ran..."  I'm telling you, I'm dramatic.  Of course, we all know that I don't just sit still for 5-8 hours without having to move my body somehow.  The first day, I hiked with my brother.  The second day, I danced my behind off at a Maroon 5 concert.  I made sure I looked like an injured runner to soak up sympathy from strangers.  ;-) 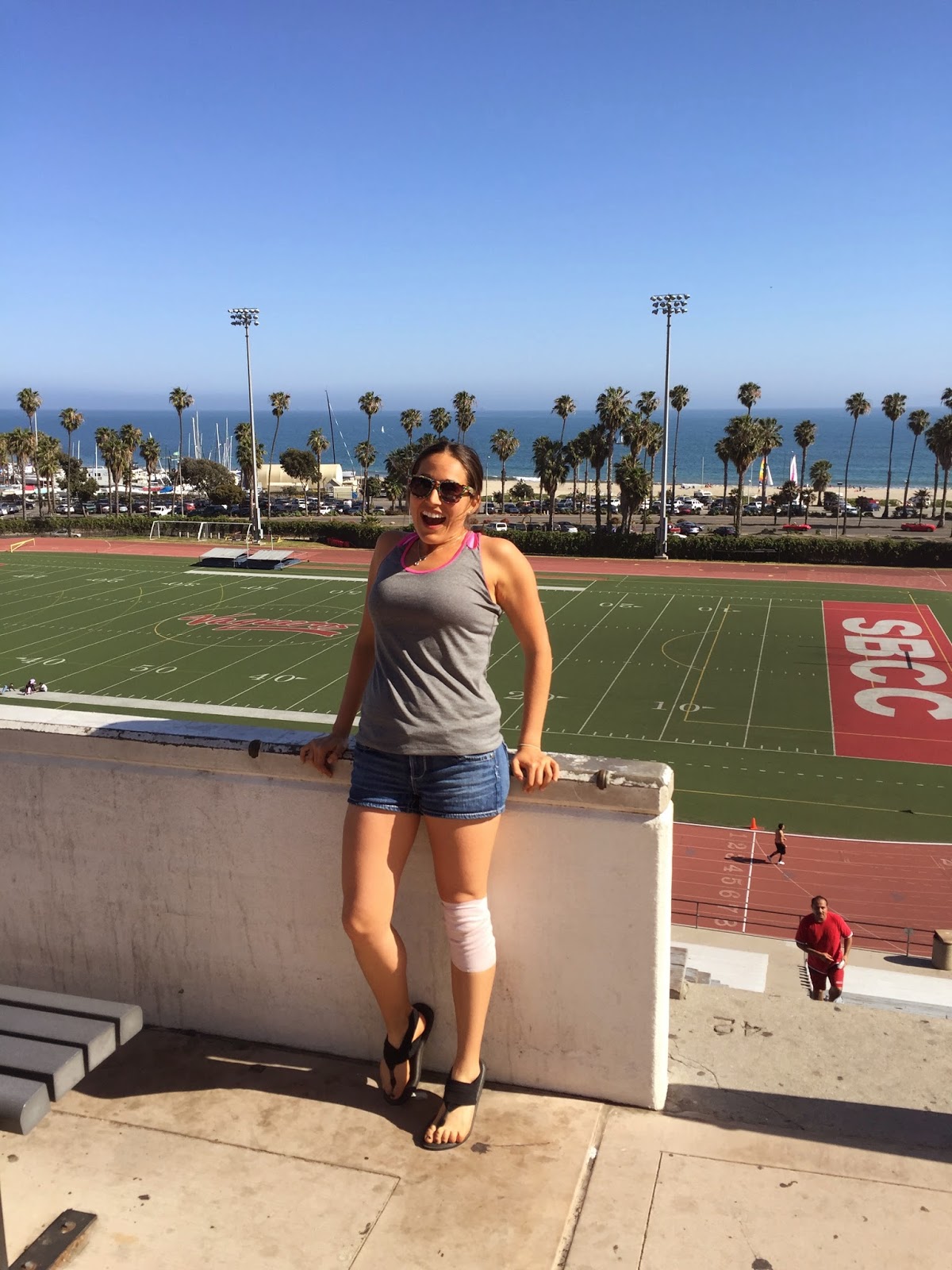 Fun fact: I went to Santa Barbara City College my first year out of high school.  I wasn't a runner yet, so I didn't take advantage of their amazing track.

By Sunday (Easter), I had had enough and wanted to at least TRY to run some miles.  So I did.  Seven.  On the hotel treadmill.  Very, very slowly.  My knee didn't hurt at all while running.  But it sure did afterward.  I was so frustrated. 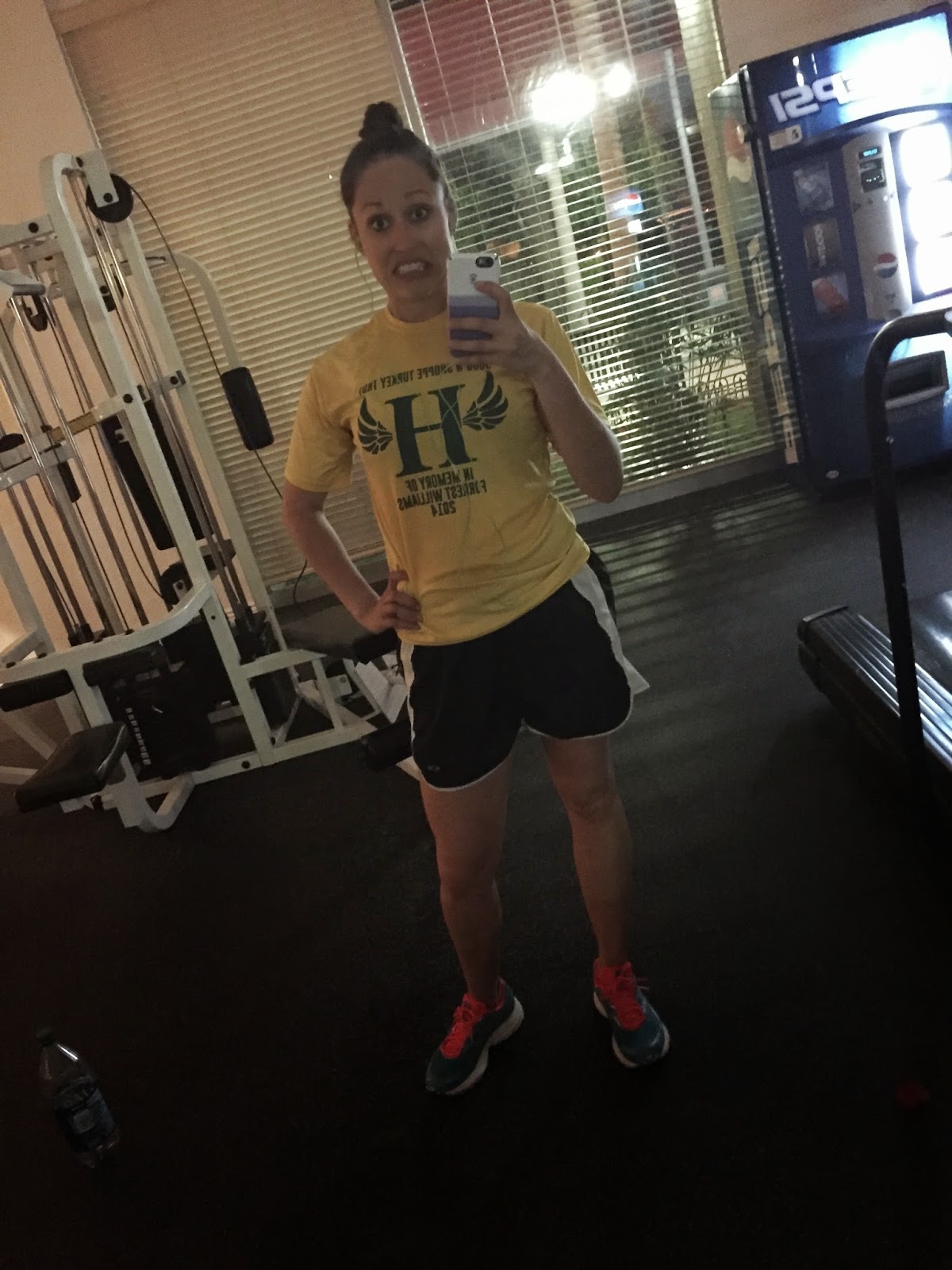 If you don't selfie, it didn't happen.

So, I took another day off.  And by "day off," I mean sitting in a truck for too many hours and playing in a huge desert. 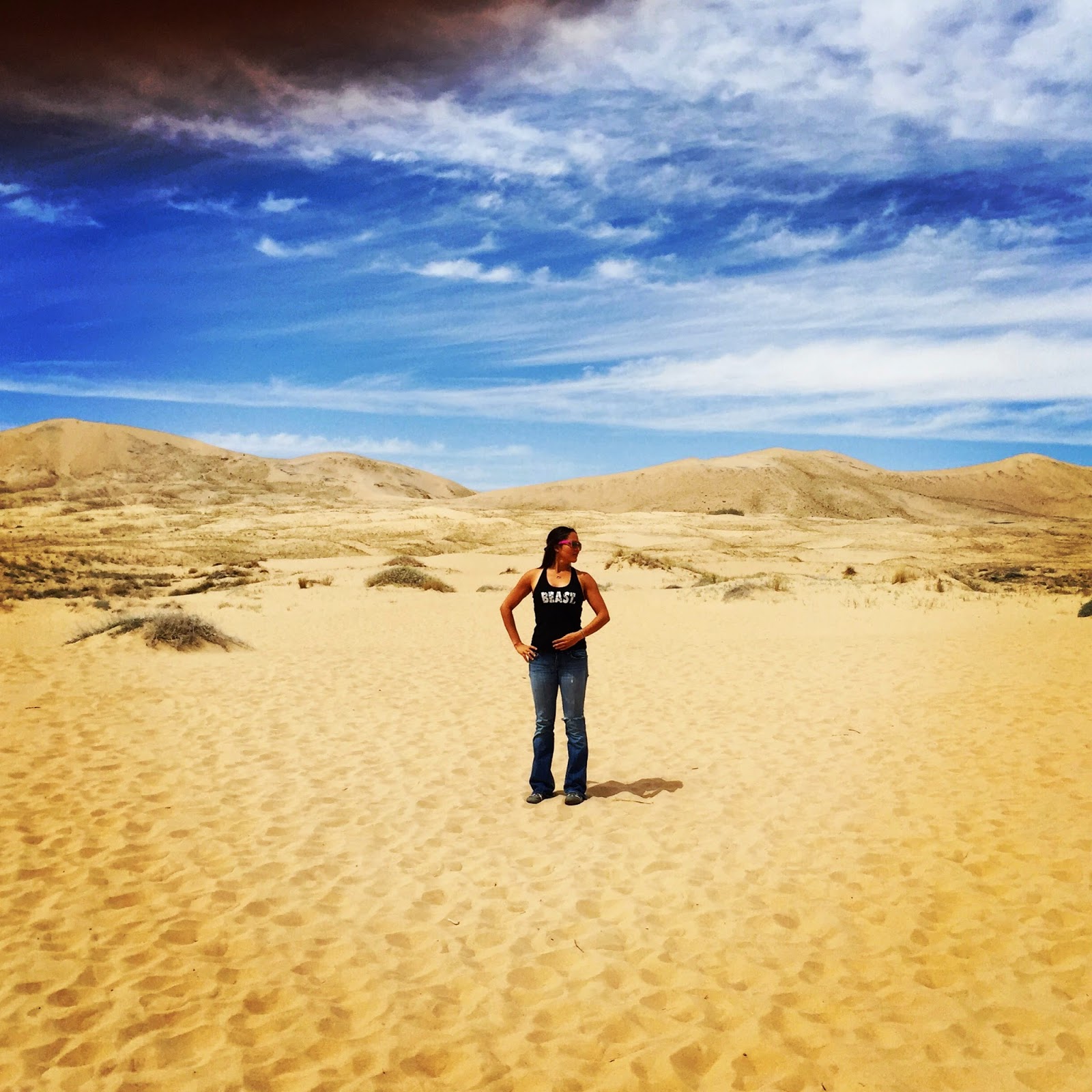 And doing things like jumping off dunes.  I heard that was good for your knees, so I went ahead and tried it. 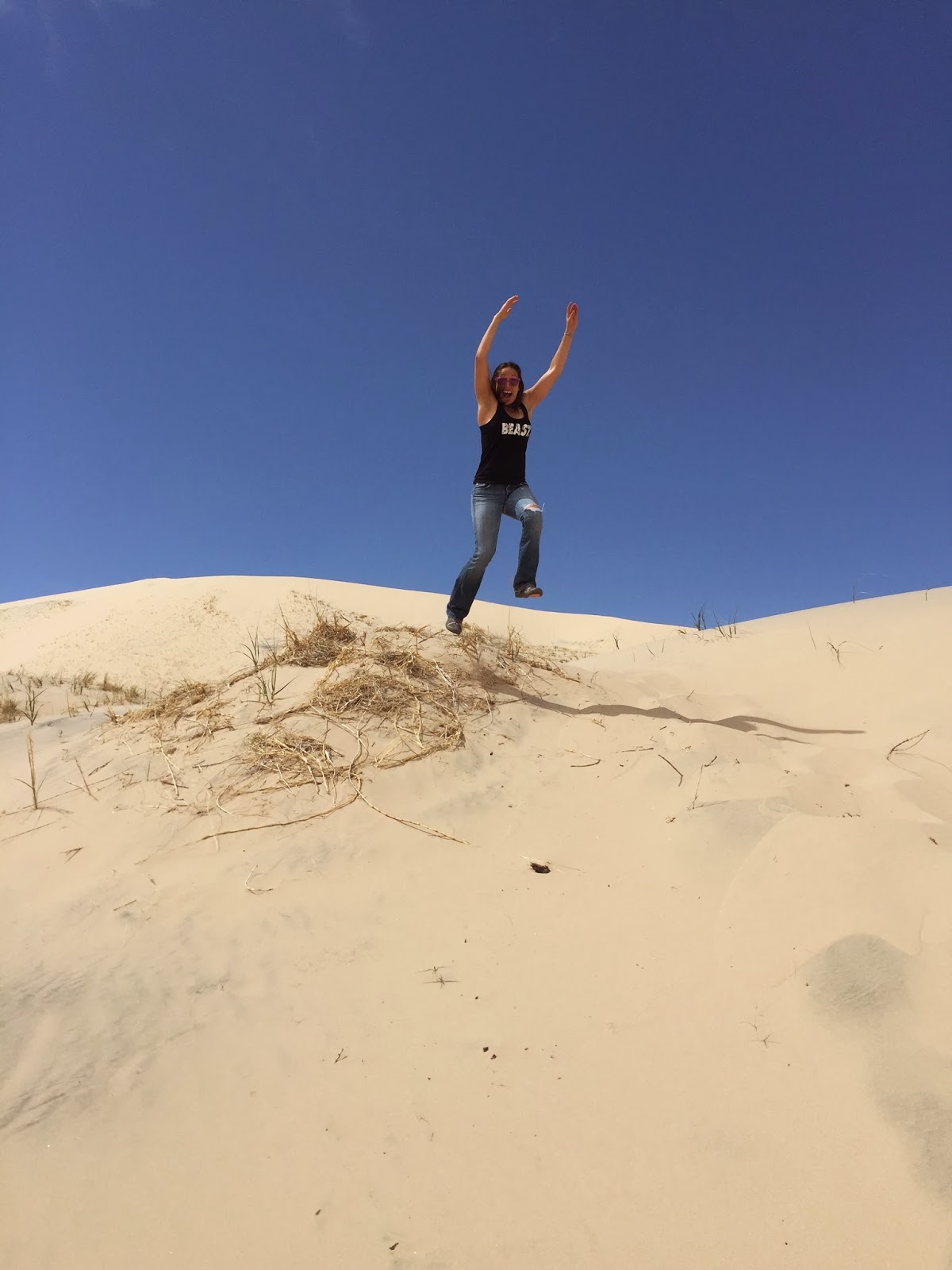 I took the next day off too.  And by "day off," I mean I hiked down into some huge hole in the ground and back up. 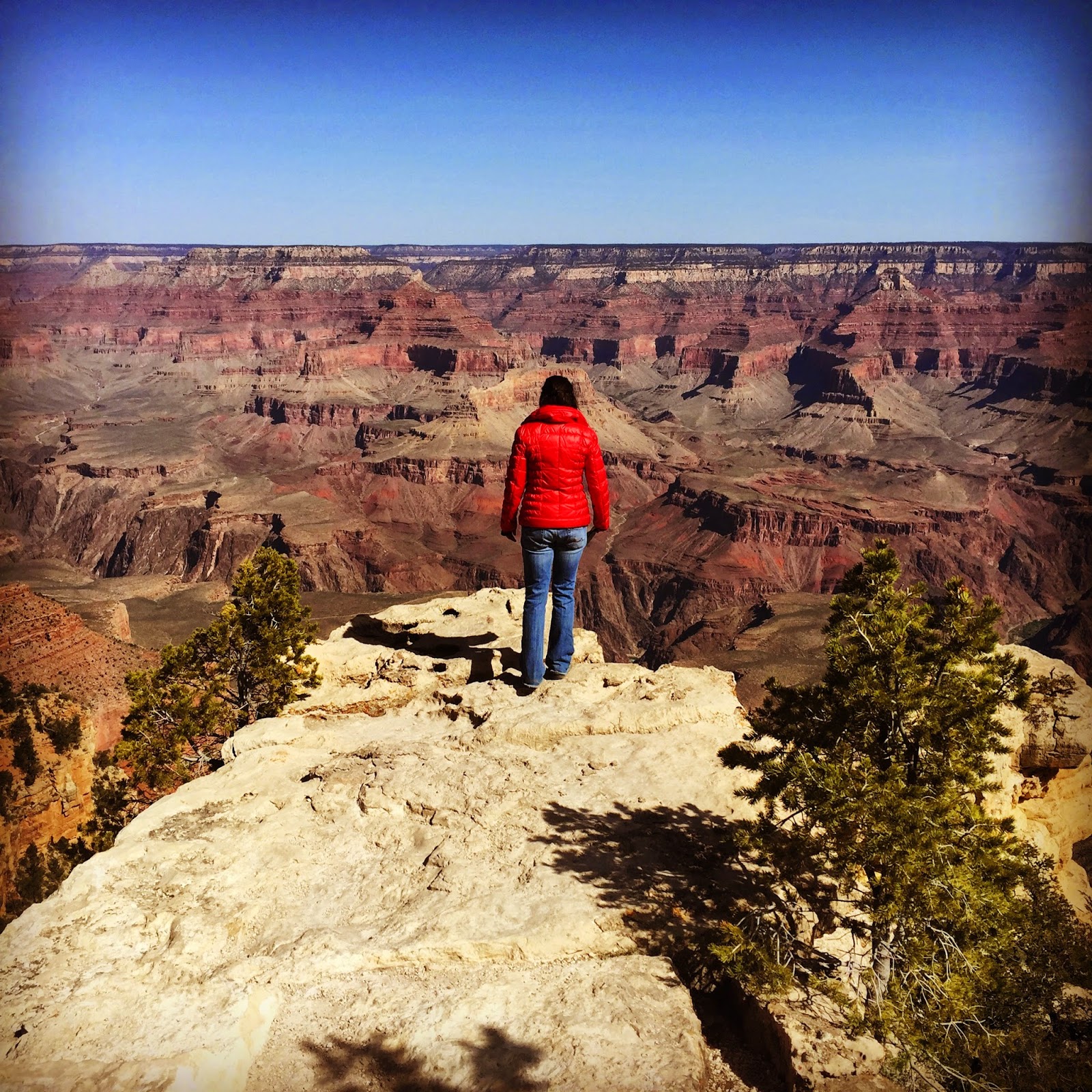 We only went a mile down into the Canyon, but it was enough to make my knee not particularly happy with me. 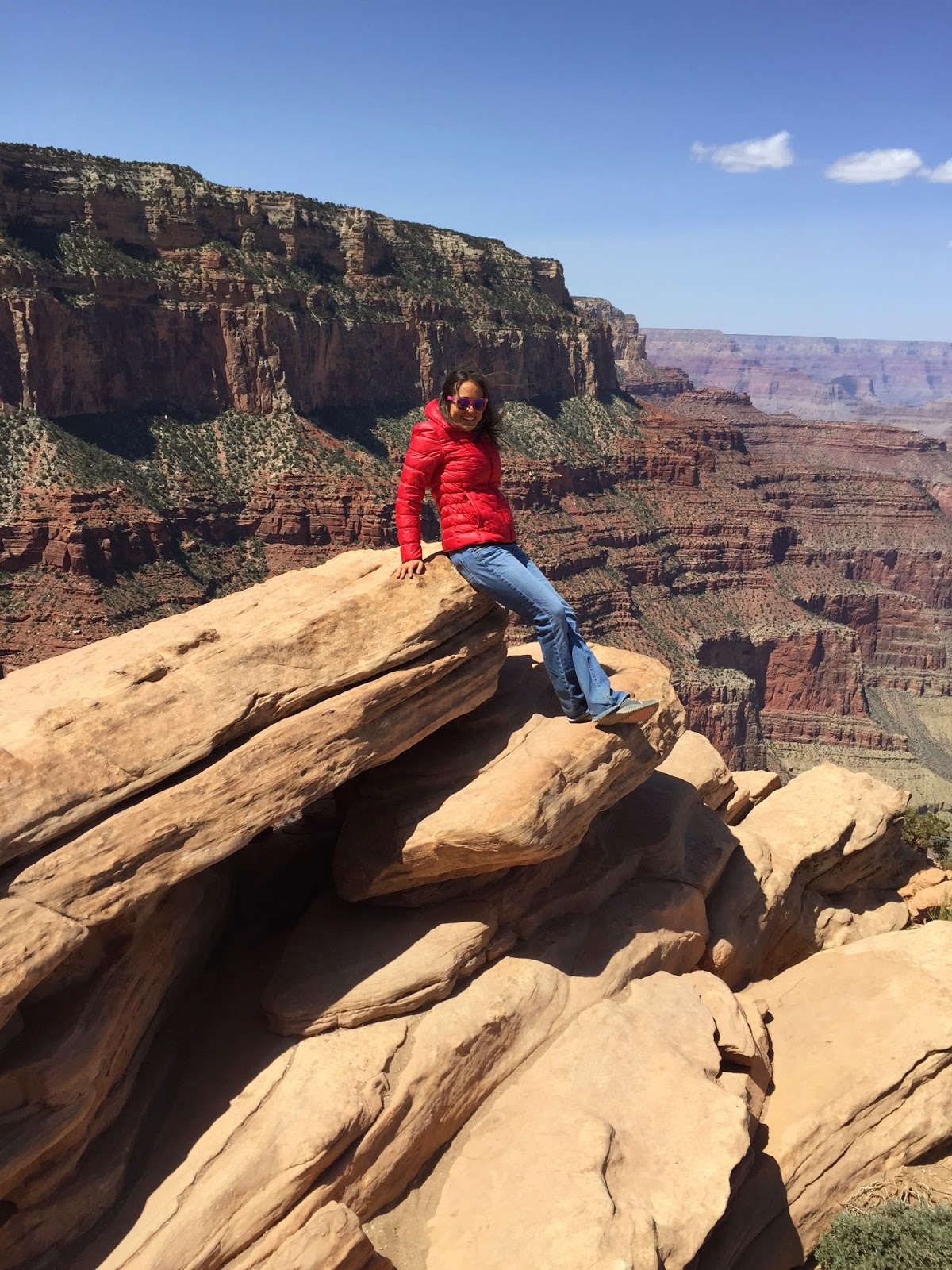 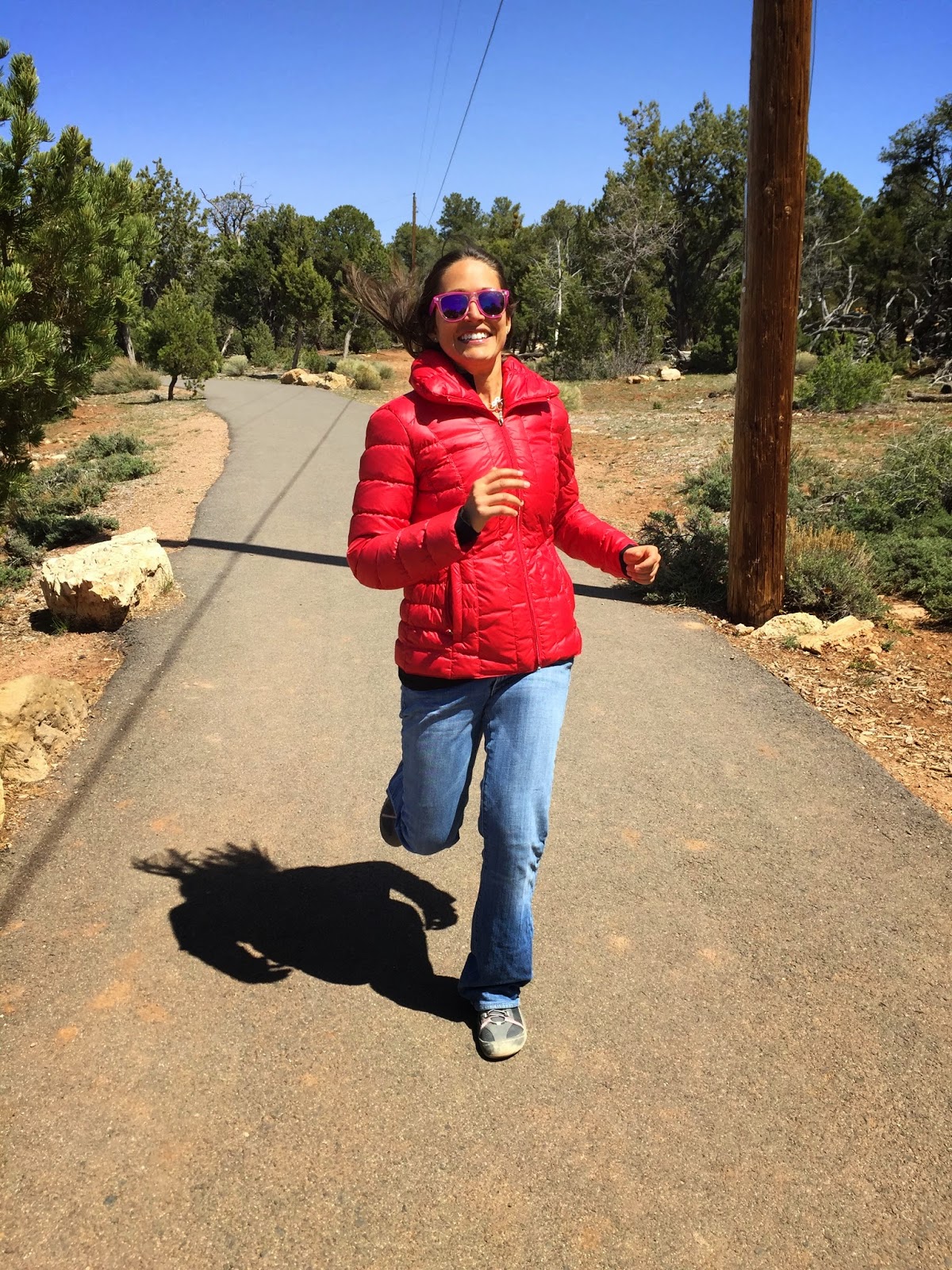 By the time we made it to San Diego the next day (I am not kidding when I say we were in the car for hours and hours and hours), I was more than ready to run.  Luckily, my travel buddy understands my addiction and happily went with me to a lake where I ran 5 mostly pain-free miles. 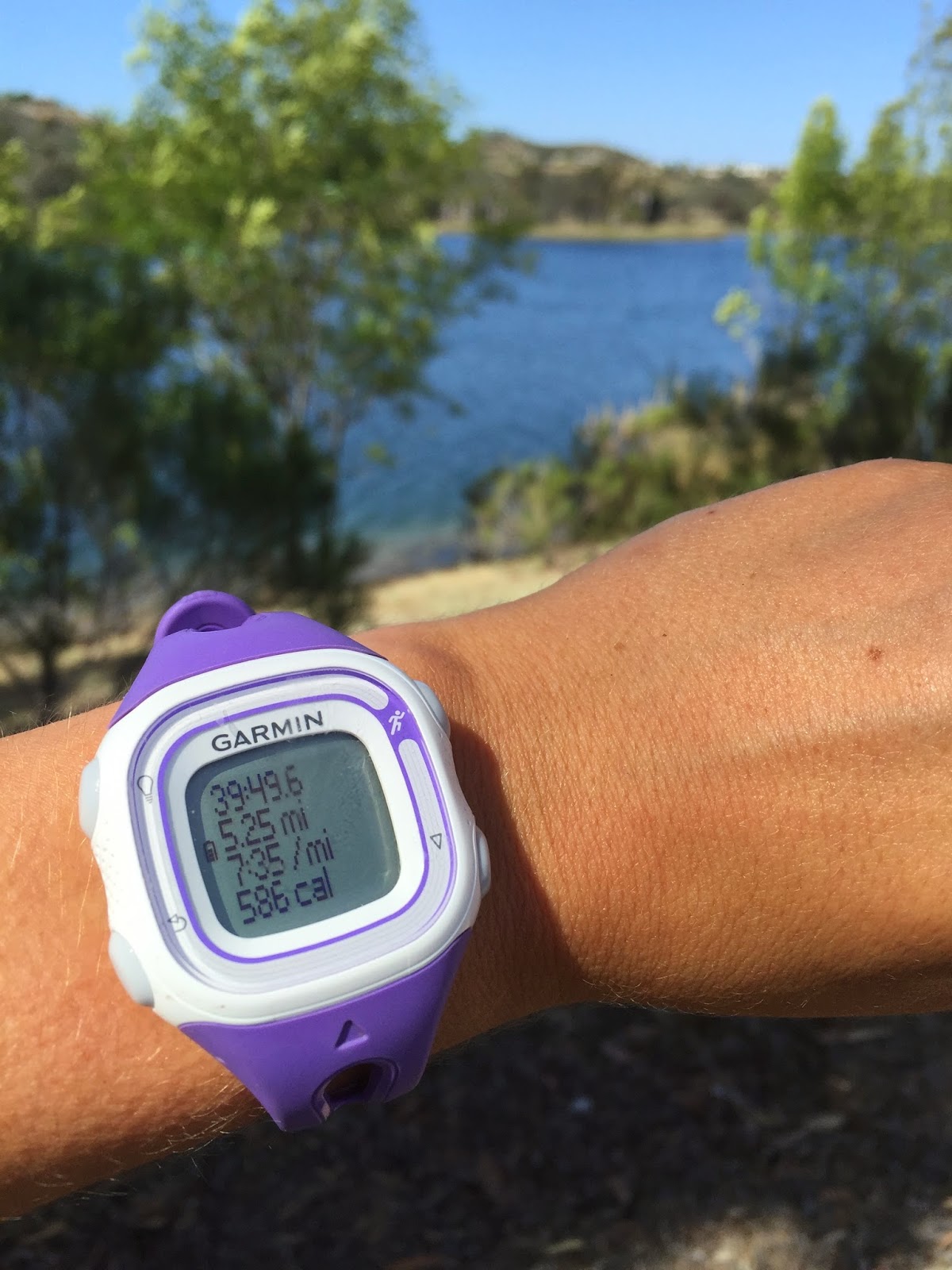 As soon as I hit concrete (as opposed to pavement), my knee seized up.  So I stopped and did some body weight exercises in the sun next to the ugly lake.  My life is really hard sometimes. 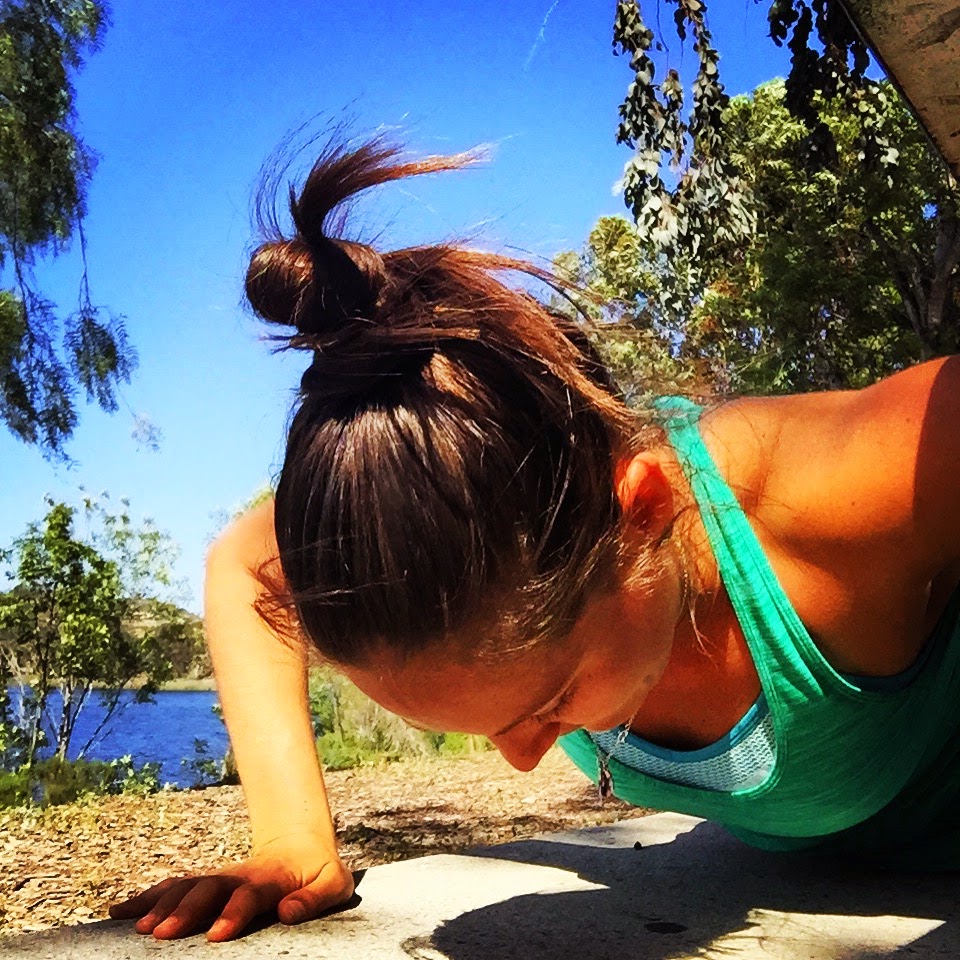 I was ecstatic that my run did not hurt.  So ecstatic, that I went for a trail run around my sister's neighborhood the next day. 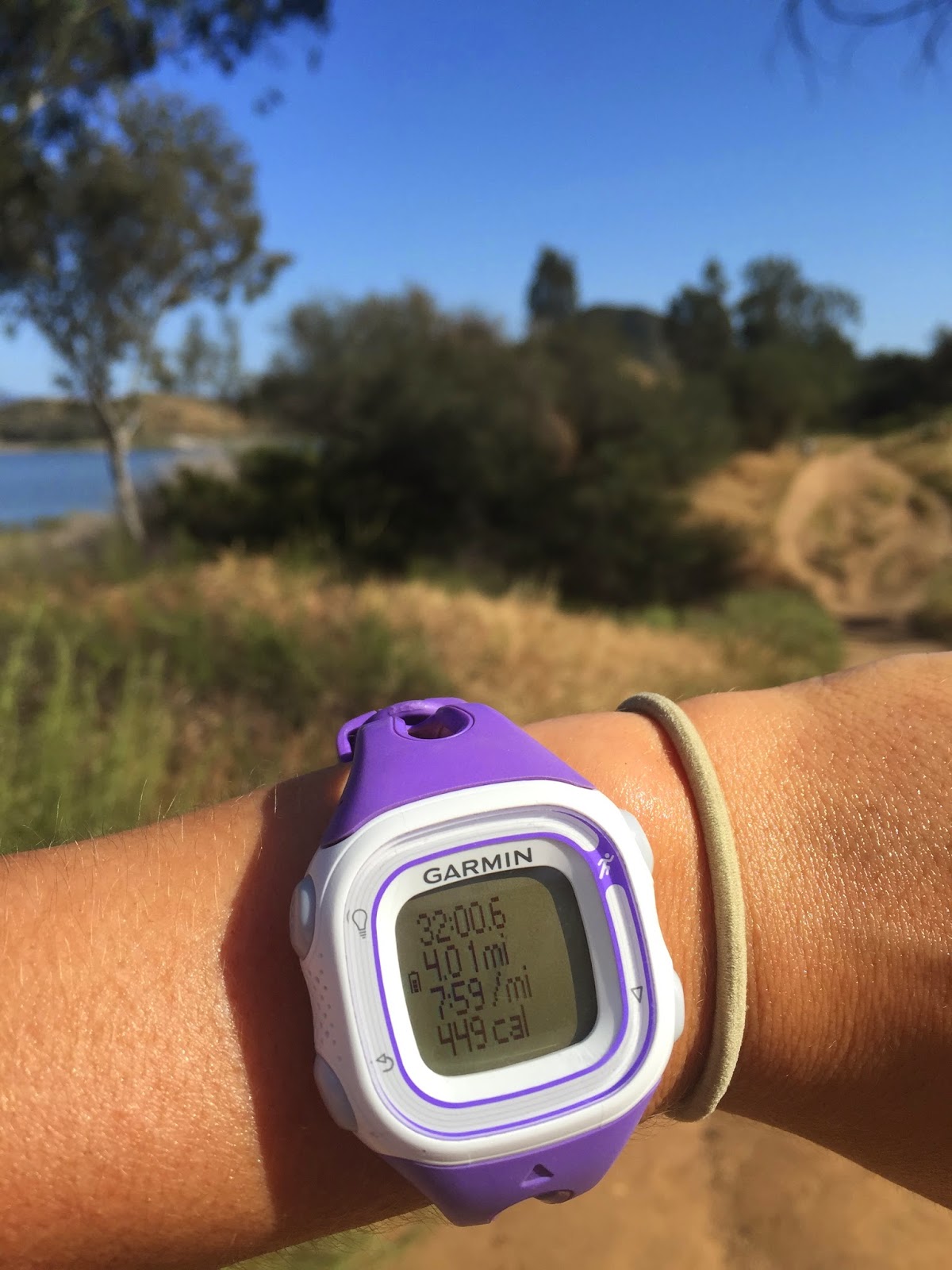 Which resulted in me not being able to walk down stairs.  I was incredibly frustrated, but so happy that my knee didn't hurt WHILE I ran, as it had previously.  I was able to run another four the next day at a gym we stopped at while avoiding Sunday afternoon traffic.  My mileage for that week went up to 20 whole miles! 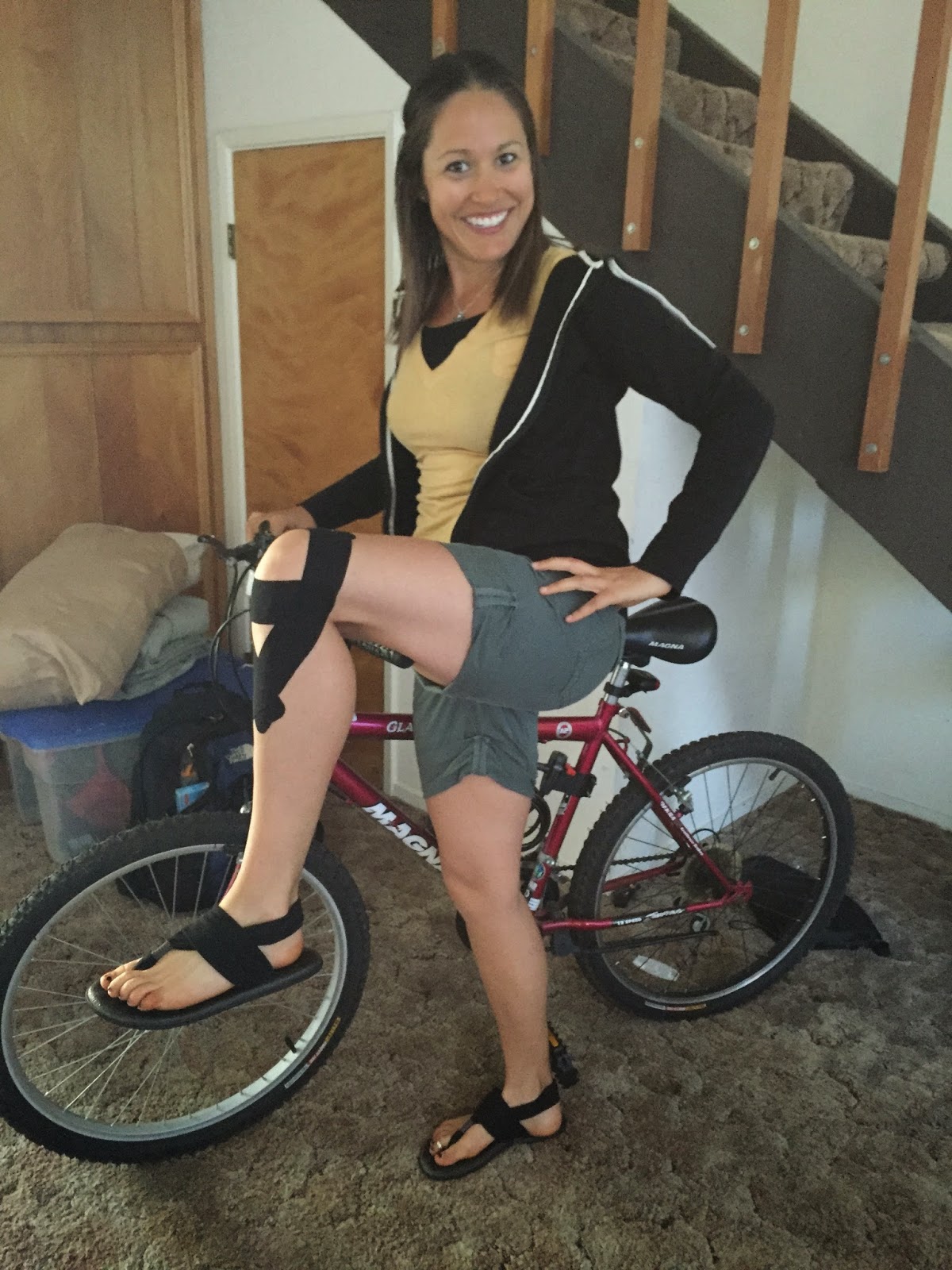 I was desperately trying everything under the sun.

This week, I am back at home.  I've been diligently rolling and icing.  I am convinced it is an IT band issue and not necessarily my knee.  I have also been delegated to the treadmill (soft) and stuck at a very slow (for me) pace.  I have come to HATE the treadmill, but at least I am running.  I finally ventured outside to run with Karen and her husband before they took off to Boston.  Then, I ran by myself outside yesterday.  My knee has not bothered me at all!  I'm back up to 30 miles this week.  I attribute this to being overly cautious, running slowly, and actually stopping when it hurts. 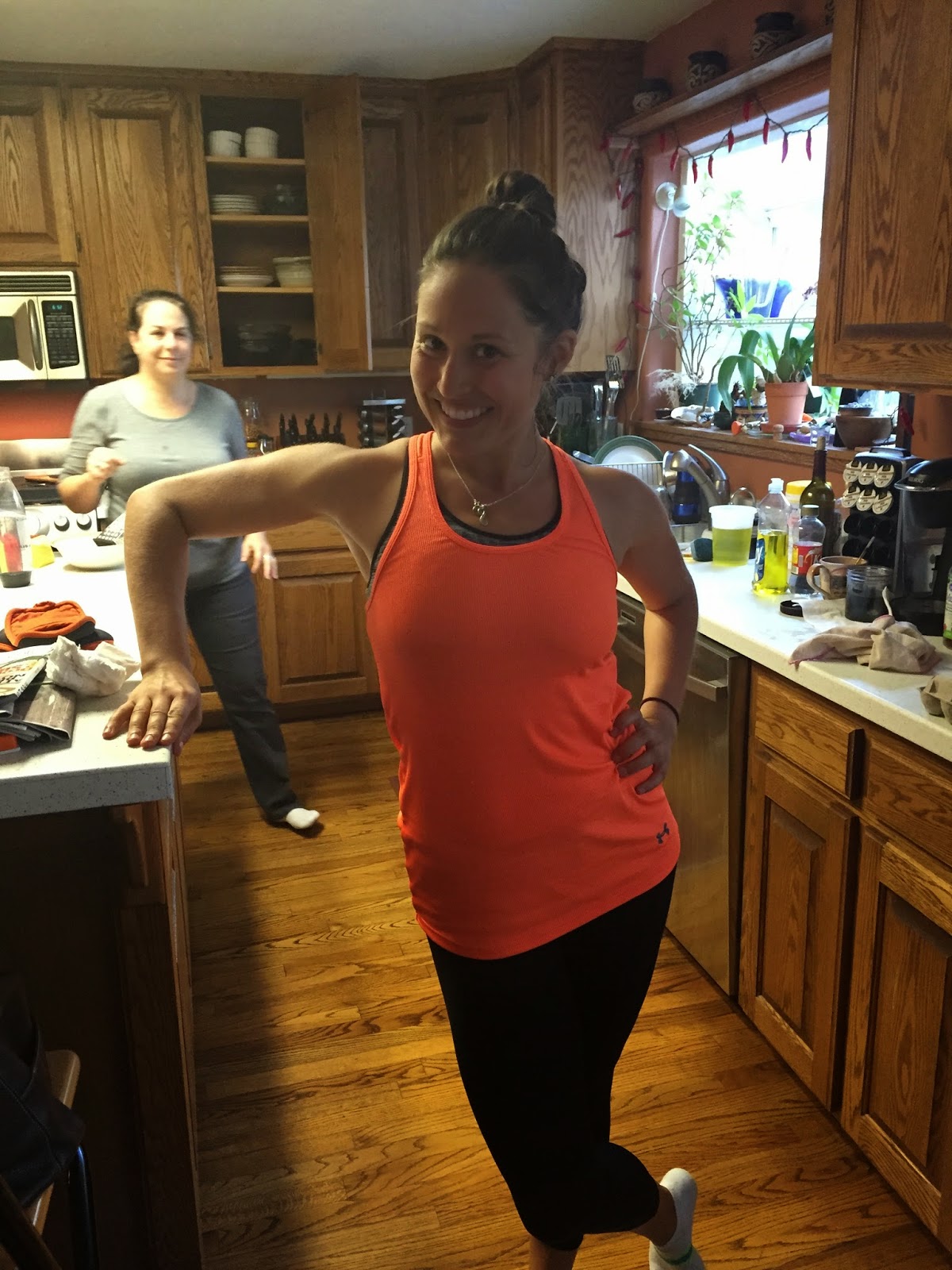 I am so sad that the marathon isn't going to happen.  I will probably end up running the half-marathon instead (hopefully).  I know that a marathon is in my future and the distance no longer scares me.  I am in love with running and I hope to run for my entire life.  If that means taking a few days off and going easy for a few weeks, I am willing to do that, even though it is extremely hard for me to do.

So that's my running saga.  Thanks for sticking with me.  I am planning on writing posts about my amazing trail weekend and my fantastic 10-day marathon of a road trip, but until then, enjoy this video of how we spent most of our hours in the truck.