I had signed up for this race months ago.  Like, in April.  My soulmate's husband convinced me since he had run it last year and enjoyed the course.  So, of course I couldn't turn down a race and a visit to see them.  The race seemed so far off, that when this weekend finally rolled around, it came as somewhat of a surprise. 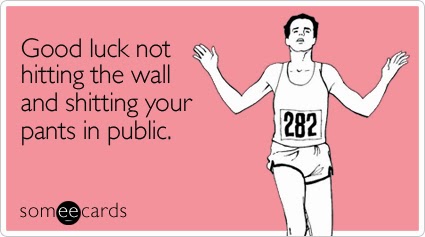 This course is pancake flat.  The only inclines happen when we run under the freeway twice.  So, everyone was pretty certain I could PR in this race.  My friend thought I could pull off a 1:35.  I knew that was really, really pushing it, considering my last half was a 1:38, almost 1:39.  So, I went into this race with no real expectations, but kind of hoping for a PR of some sort.  Unfortunately, the weather gods decided that summer should make an appearance in October and decided to be 65 degrees at the 8am start. 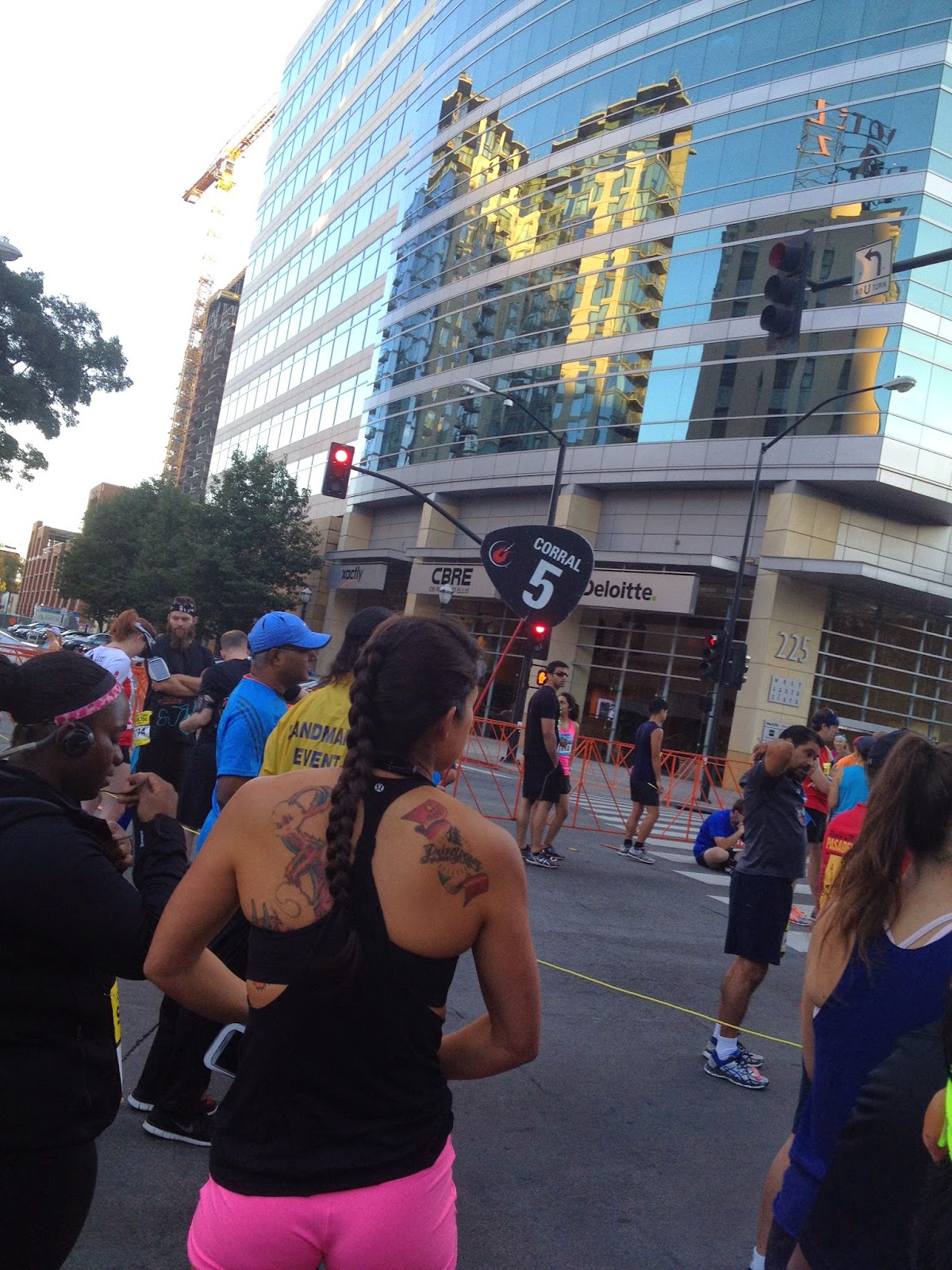 That felt perfect at the beginning.  I ate my banana and drank my coffee and people watched.  I also asked a stranger to take a picture of us. 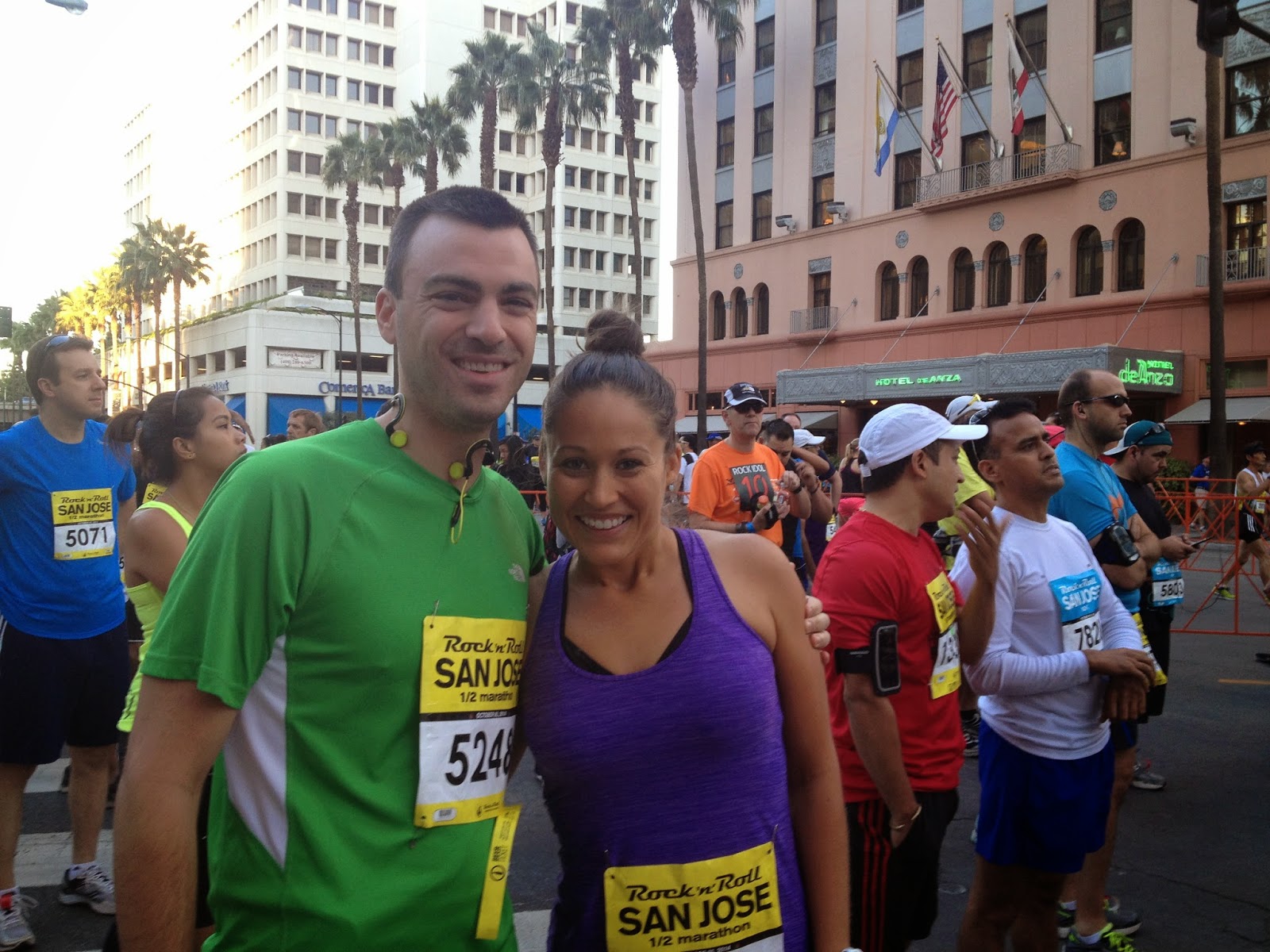 Please notice how tired I look.  I had rested well and slept well the entire weekend and yet I was still pretty tired.  Once they sang the National Anthem, we were off.  I was in corral 5, so it took me approximately 2 minutes to actually start.  I tried to start off conservatively.  I did feel dehydrated and my mouth was dry from the beginning.  Never a good sign.  My legs were really heavy, which was weird as I had taken two days off from running.  My first mile clocked in at 7:18, right on track.  My next two miles were exactly 7:05.  I crossed the 5k mark at 22 minutes.  At this point, I was soaking it all in.  I had never run a race this big before and I'd never had random people cheering me on.  It was fun, but I was not enjoying dodging people left and right. 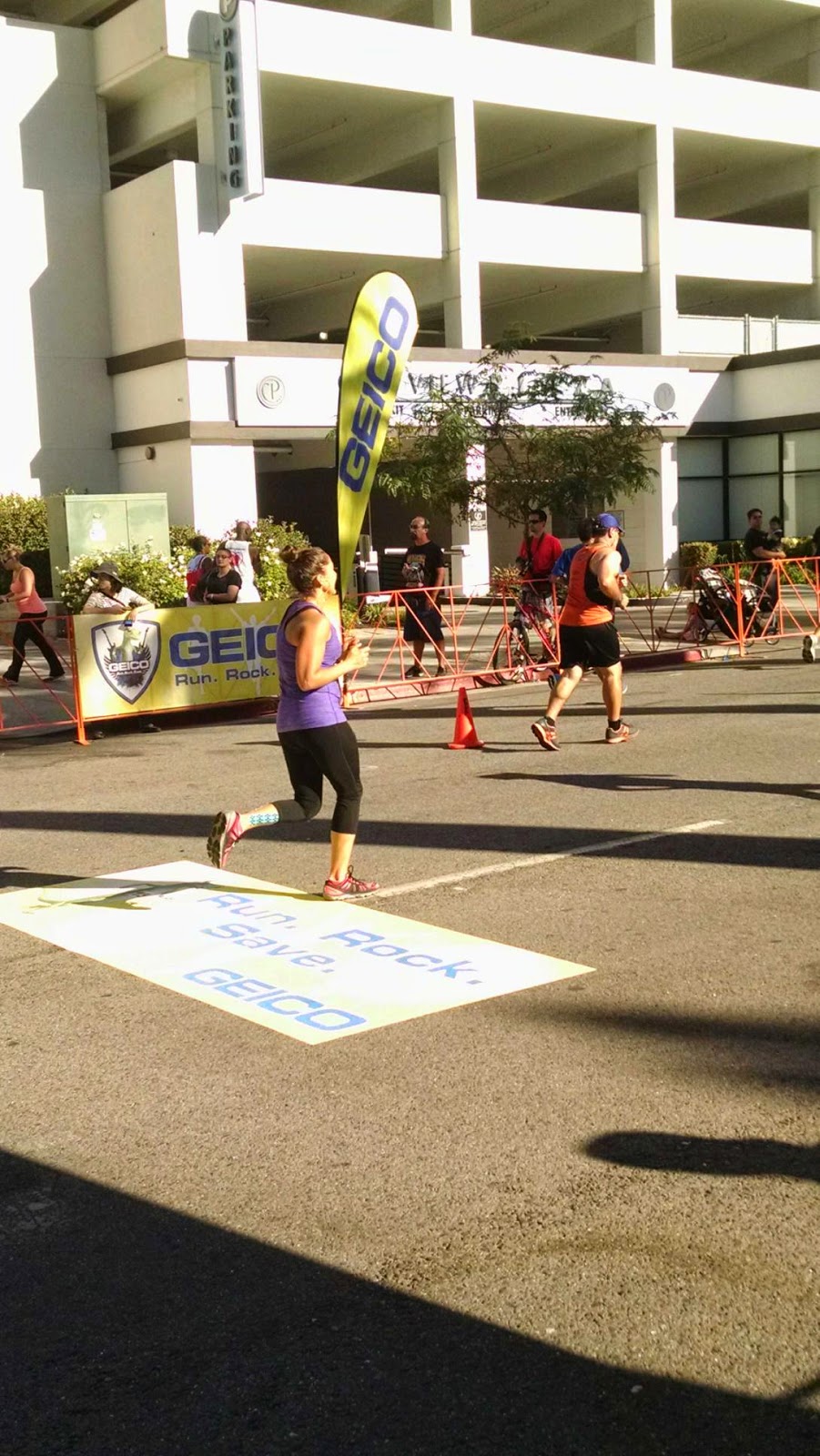 As it started to warm up, I started to slow down.  I tried not to let my pace get above 7:20s.  I took water at each station and sipped Gatorade (which I HATE) at miles 6 and 8.  Then I got hot.  Around mile 6 I felt pretty warm, so I dumped water on my head.  At mile 8, I was really hot, so I took a frozen sponge and squeezed it all over me.  At mile 11, I was almost passing out.  I felt really strange and knew if I didn't slow down, I would actually pass out.  This was scary and really deflated my spirits.  Mile 11 clocked in at 8:10.  I know that a lot of people would love to run an 8:10 mile, but coming from 7:15s-7:20s, this mile seemed to stretch on FOREVER.  Then, some lovely man saw me struggling.  He told me that I was about the 78th woman overall and to not give up.  This boosted my self-esteem and I picked up the pace.  I finished the last mile at a 7:20 pace again.  I had never been so happy to see a finish line in my entire life. 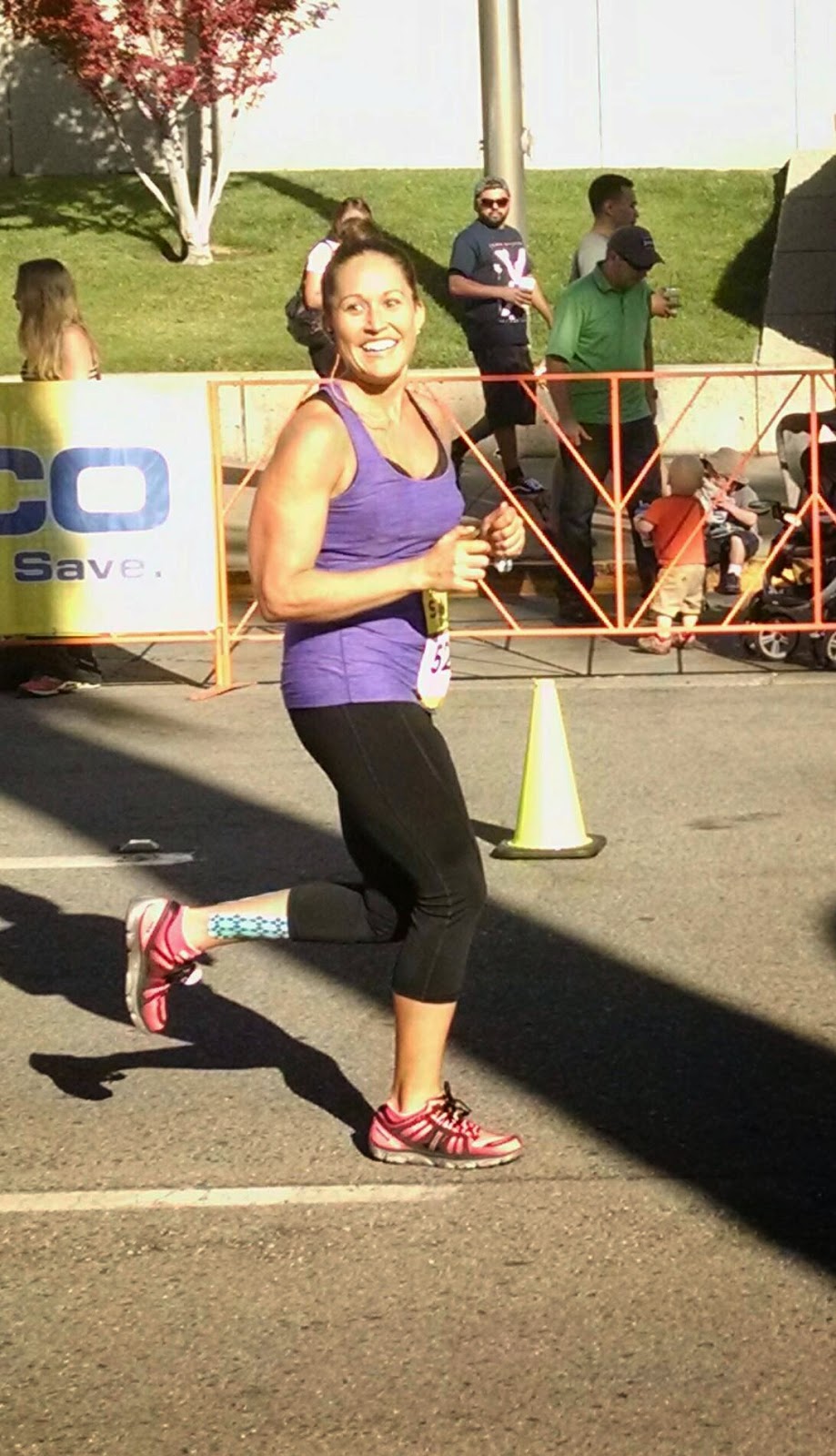 As I was coming into the finish, I heard my name called by a voice I did not recognize.  I was so unbelievably confused as to who would possibly know me.  I looked behind me to see if I could tell who it was.  Turns out, it was Spectator of the Year and he was standing with my soulmate.  Luckily, she caught my classic "What the heck?!?" face on camera.  It's my favorite picture of the entire day. 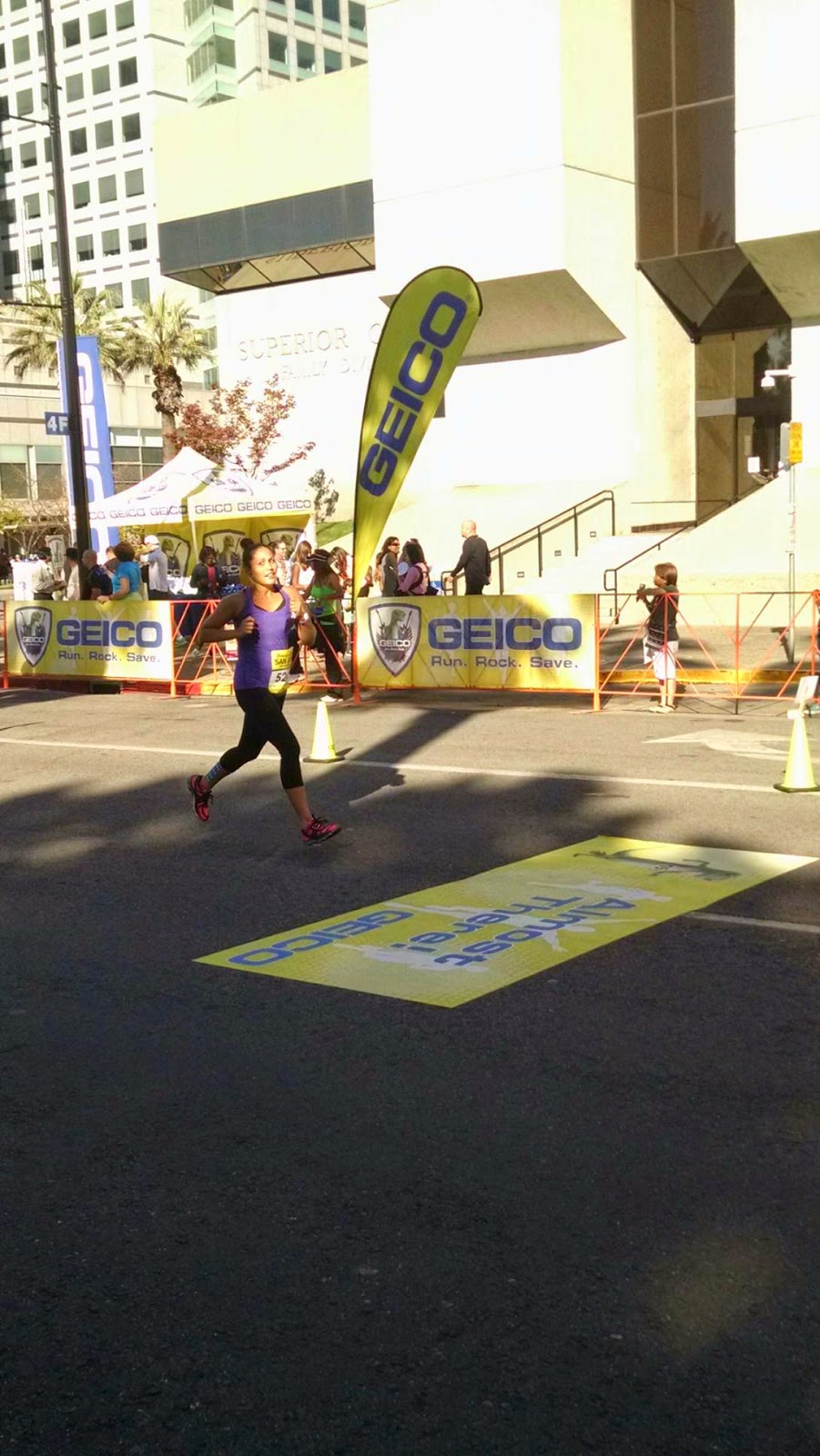 I had absolutely no idea what my official time was.  All I knew was that my Garmin said I had done 13.2 miles in the same amount of time as my last 13.1 mile PR.  So I knew that I had run a little faster this time.  But not by much. 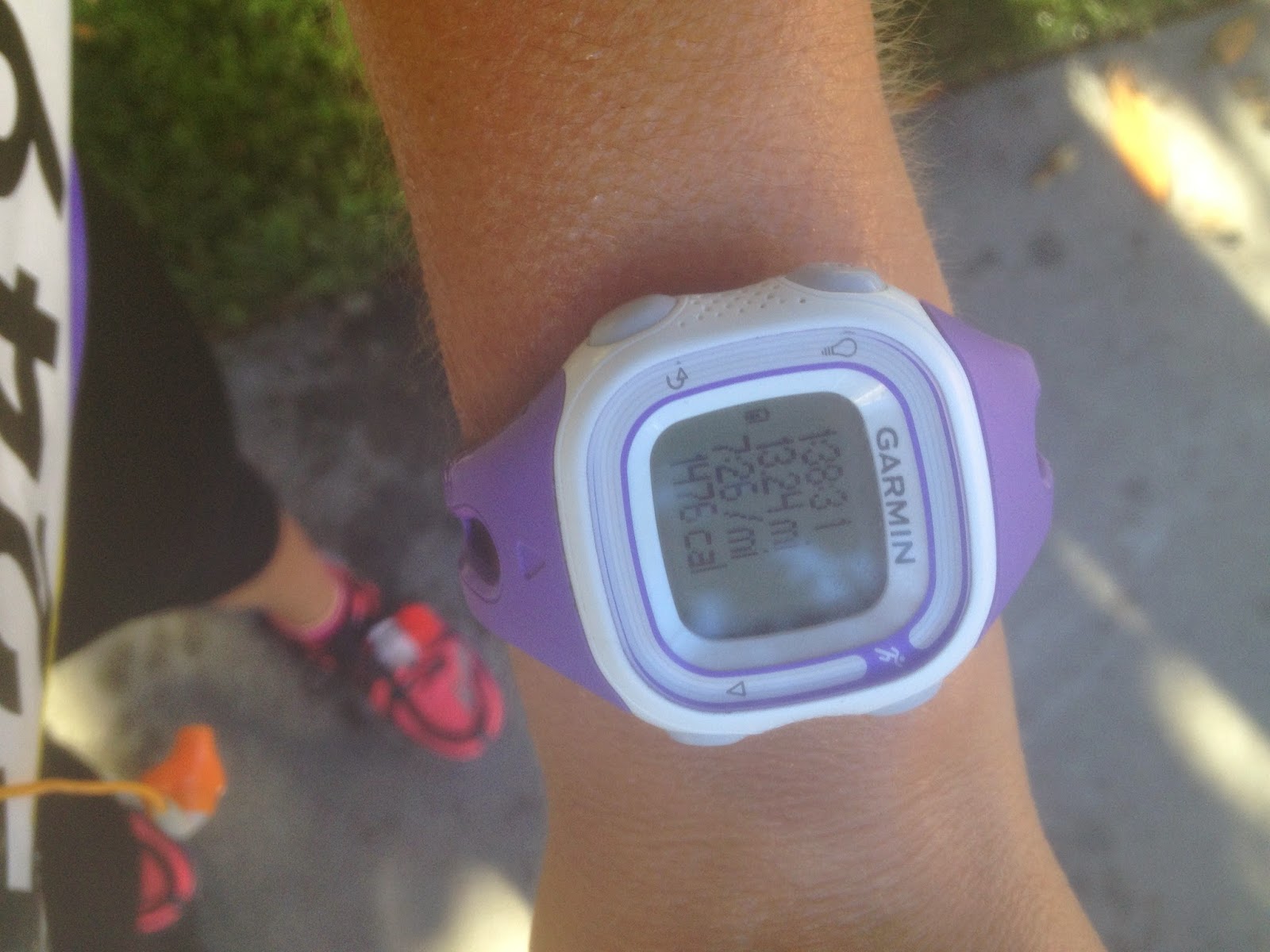 My official time ended up being 1:38:10.  While this technically is a PR, I was pretty disappointed in myself for failing on that 11th mile.  I know I shouldn't have been so hard on myself because I was miserably hot and I could have really hurt myself, but I could have gotten a 1:37 had I just done it a few seconds faster!  I did come in 74th woman overall, out of 4206!  So, I felt pretty great about that.  The man wasn't making anything up when he told me that to cheer me up.  I was 18th in my age division out of 591 and 387th overall out of 8265 runners.  I was pretty proud of myself when I saw those results. 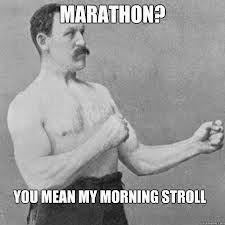 The only thing I could think about when I finished was cooling down.  Luckily they were handing out frozen towels, which I immediately grabbed and put on my head. 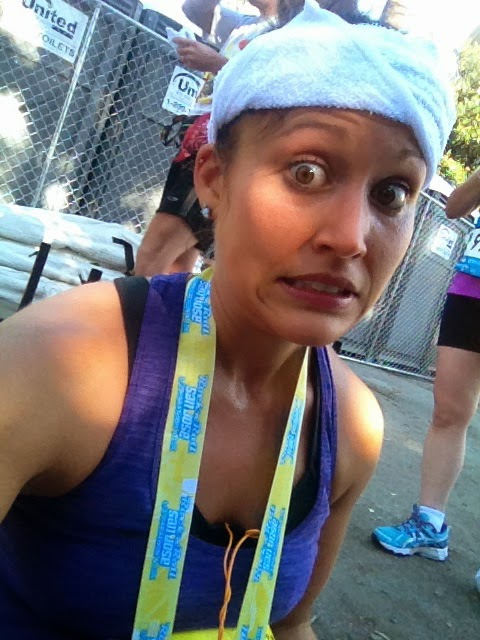 I somehow missed the water my first time through and water was another thing I really needed.  So, I had to wander back to find water.  It was a little bit stressful, but I did end up with a large pile of snacks.  Of course, I had to carry everything in my hands.  I was a hot mess at the end of this race, literally. 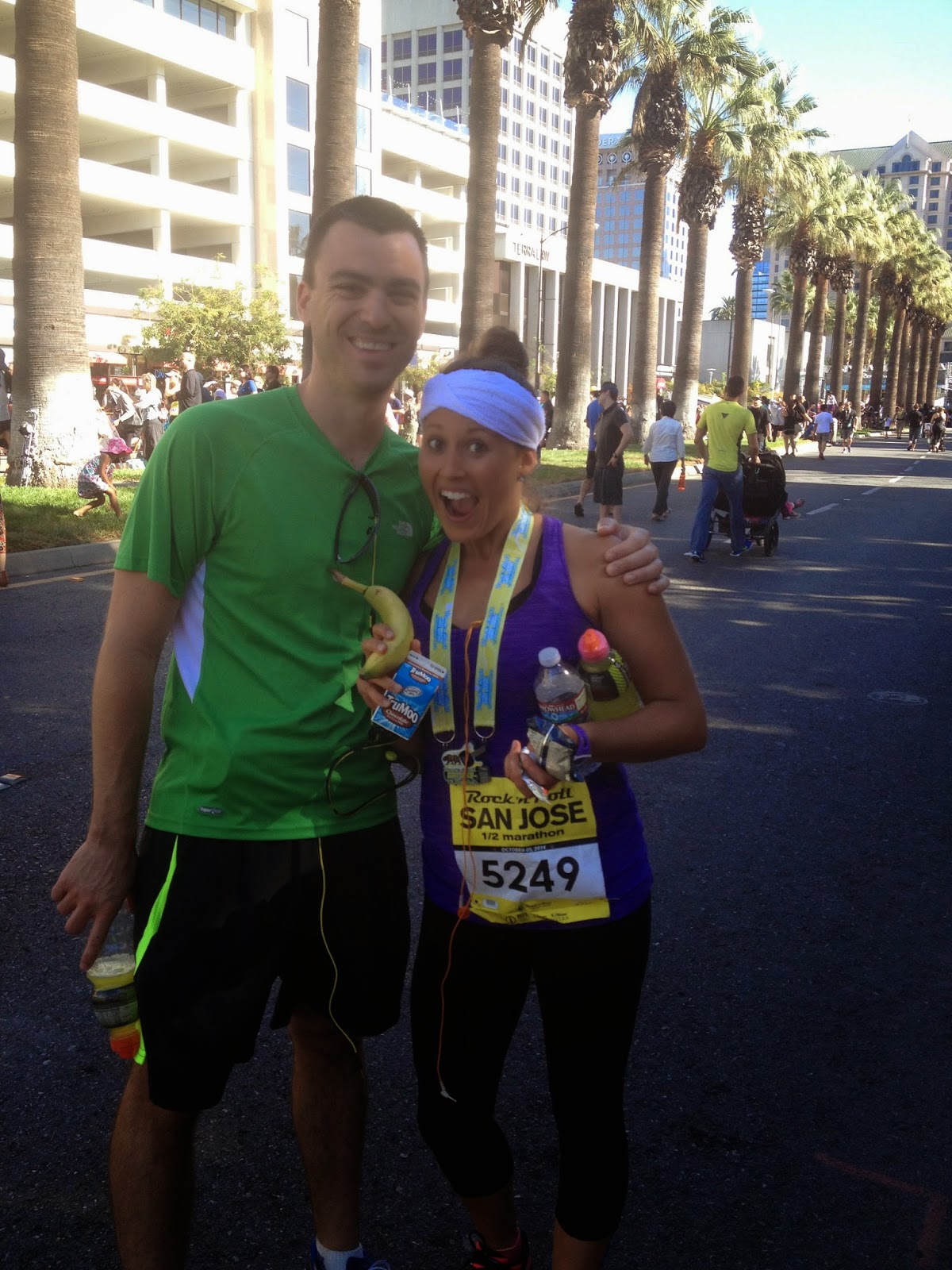 So there you have it.  Half marathon number 4 in the bag.  I have completely mixed feelings on my performance, but the race itself was wonderful.  The music at each mile was awesome, the spectators and volunteers were amazing, and the course itself is extremely flat and easy.  If you're looking for a fun, well organized race, I highly recommend this one.  I don't have any races on the schedule in the near future.  There's a 5k/half marathon/marathon in two weekends that I am debating running the 5k.  The half marathon is the exact same course that I have run twice and it's a championship of some sort, so all of the runners are REALLY fast.  I heard a rumor that Ryan Hall's wife is traveling here to run it!  Until then, I will continue running what I want, when I want.  I love not having the pressure of a race coming up!

When's your next race?
Posted by NotRachem at 9:13 PM